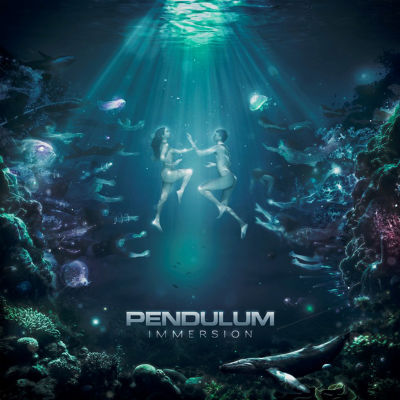 Pendulum release Immersion , their third awaited album. It’s immediately clear that they have returned to a similar sound to Hold Your Colour whilst still retaining the more rock – based style of music used on In Silico and expanding into Dubstep and Electro House.

Its variety is remarkable, they explore successfully other genres, supported by the likes of Placebo and Porcupine Tree’s singers, as well as they experiment death metal sounds.

Bringing this matter up again, the first track, Genesis introduces the listener to such atmospheres you could find at Hogswart, while Salt in wounds catches you unprepared because it would be good for a cyberpunk soundtrack you could hear in Matrix, the sonic tapestry is made by massive synths , tempo slows down suddenly as it would be played in slow motion, but as it slows down so it becomes hard beating again.

Watercolour was chosen as single and I think it’s a winning choice since it’s the best track of the album, it finds Rob Swire’s vocals alternating between dreaming melodies and an atmospheric, tension building breakdown, it makes your blood pump through your veins!

Set me on fire and Crush explore the softest side of the band. Even if they are led by electro and techno backdrops, that is the pure nature of Pendulum sound, they choose sounds that open your imagination as you could see a desert or a wasteland, they could appear even romantic.

The album goes on between ’80 atmospheres, called to mind by the typical gaudy synths sound and distorted vocals, (Under the waves) and some art rock elements mixed to electro-dubstep background, clearly inspired and featured by The Prodigy, as in Immunize.

The Island is a little opera split into two parts, Dawn and Dusk. This division reflects two different spirits, so two different ways to live the day. Dawn is a house tune, that kind of house that you can listen to at your disco, so it’s relaxed and soft, while the Dusk is wilder, is the good moment for a rave party, so sounds play along the new mood
Witchcraft is a good electro- rock ballad that turns into a classic dubstep, while Self vs self explore the death side of the metal, thanks to the featuring of In Flames. The result is simply brilliant, they prove that mashing up two so far genres is not outside. The fountain features Porcupine Tree’s singer. Indeed, Wilson’s vocals are more than appropriate for the song, but other than that, it adds nothing to the idea of what a great fusion progressive rock and electronic could have been achieved. But perhaps the attempt with the death metal all-stars was quite enough for some.

The album end on the notes of Encoder, that mixes sounds of ‘80’s hits to soca elements.

Immersion is the perfect title for this album, Pendulum are not afraid of taking risks and succeed in creating experimental and not easily forgettable tracks.