The brainchild of singer/producer/songwriter Will Hunt’s alter ego, Dansette Junior was borne through a chance encounter in the not so salubrious area of Kentish Town, North London. It was the summer of 2005 when Will decided to move from his native Birmingham to London and he set up home above a Wetherspoon’s pub in Bethnal Green (where he would work part time) whilst gigging across London as an acoustic singer songwriter. It wasn’t until the following year he moved to Kentish Town, bought a load of DJ equipment and synths and could regularly be found at London clubs Fabric, The Cross as well as club nights Laser Club at The Legion and Potty Mouth Disco.

Will met Graham Gaffney in a local Kentish Town pub when the pair bonded over a shared love of Godspeed You! Black Emperor. They instantly hit it off and decided to start making music together – Graham on drums and Will on guitar and the synth gear he had recently bought. It wasn’t until September 2008 that the pair met Johnny McDermott (synths and bass) at east London club night Peanut Butter Jelly Time and Dansette Junior were officially born.

The band are set to play at this year’s Rockness Festival on Sunday 13th June, Glastonbury on Friday 25th June, and Big Chill August 6th. 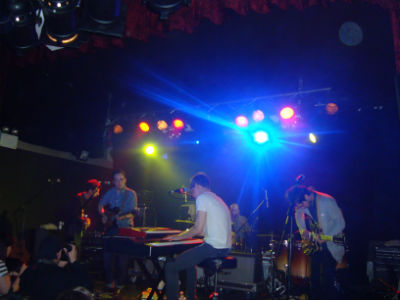