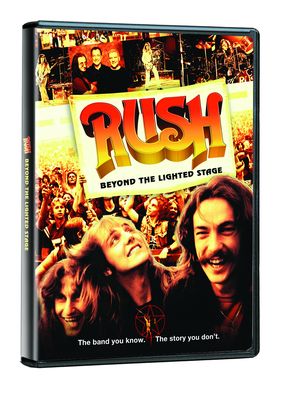 Universal Music Group, the world’s leading music company,  in association with Banger Films is thrilled to announce the feature length DVD and Blu-ray release of the critically acclaimed, award winning documentary, “Rush: Beyond The Lighted Stage” on June 28. The film made its world premiere in April at the ninth annual Tribeca Film Festival in NYC and the filmmakers, Scot McFadyen and Sam Dunn won the highly coveted Heineken Audience Award.

With the DVD release of Beyond The Lighted Stage , Rush have set up their own Youtube channel on the link below that features the main trailer for the movie and a host of exclusive clips and teasers.

Rush (Geddy Lee, Alex Lifeson and Neil Peart) is one of rock’s most influential bands, ranking third for most consecutive gold and platinum albums behind The Beatles and The Rolling Stones. The band has engaged legions of devoted fans over the decades and is revered by generations of musicians. The documentary features never-before-seen archival footage and interviews with some of today’s most respected rock artists such as Billy Corgan, Taylor Hawkins, Trent Reznor, Sebastian Bach, Kirk Hammett, Jack Black and Gene Simmons. “Rush: Beyond The Lighted Stage” explores the forty-year career and phenomenon behind what could be the world’s biggest cult band. Directors Scot McFadyen and Sam Dunn embark on a comprehensive exploration of this extraordinary power trio, from their early days in Toronto, through each of their landmark albums, to the present day.

The DVD also features a bonus disc that includes the following exclusive material:

Runtime of the film and bonus disc includes over 3 hours of content.