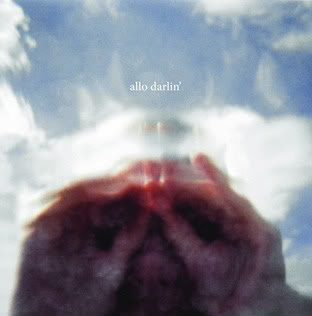 Of the millions upon millions of hardcore bands in the world, Bands that knock the teeth out of the jaws of unsuspecting listeners with sheer brute noise, bands that could start a mosh pit in the queue of your local post office on a Sunday morning, you’d expect one of them would be the brains behind a song called Henry Rollins Don’t Dance. Well it turns out the band that did write that song sound a lot like Teenage Fanclub and sing love songs about cooking. I’ll wait for you to find the socks I’ve just BLOWN OFF!

<Ahem> quite. Anyway, Allo Darlin’ are a London based quartet that are indie in the classic sense, more Belle and Sebastian than Bloc Party. Songs are characterized by interweaving boy-girl vocals, lazily strummed acoustic guitars and Ukuleles and utterly heart-rending melodies that place Allo Darlin’ among the small breadth of new bands that are not so much ones to watch as ones that are genuinely great bands in their own right. Seriously, it’s rare you get a band so fully formed on their debut record.

However, like most bands of Allo Darlins nature, their songs adhere to a pretty rigid structure, but they manage to make every song stand out, which is fucking unprecedented but it does beg the question as to whether they can pull off that trick in, say, five years time. But as it is it makes for an excellent debut album. First single Dreaming begins things with a slightly off kilter mix of dream-pop and surf, showing their killer way with a melody and the way that while the voices on the record contrast something stupendous they sound impeccable. Especially Elizabeth Morris’ intoxicating croon, which still can’t quite pull off the baffling Scottish brogue she seems to put on in the chorus of Kiss Your Lips.

Morris’ lyrics prove to be an acquired taste. She must be some sort of diarist if her highly autobiographical lyrics are anything to go by, it can sometimes be naively romantic, like on the gently sweet Heartbeat Chilli, or it can be incongruous and toe curling, like the Weezer name drop in Kiss Your Lips clunking like an Anvil on a marble floor. To be honest the slight awkwardness that pervades the record does give it a sense of charm but sometimes it can get a little too much.