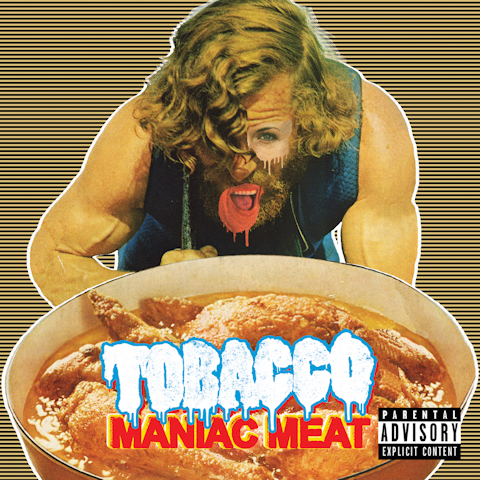 This is undoubtedly a very interesting record. A very brave one as well. The only thing we can decipher about its creator is that he must have cojones made from solid osmium to try and market a record that combines elements of hip-hop and even pop with the devil may care attitude toward sounding professional from Garage Rock and the instrumental experimentation seen in bands from Sonic Youth to Crystal Castles.

And for the first seven songs on the record, that is all it is, Interesting. And it gets very tiresome listening to something that hints at being a pop song before it gets coated in dissonant synths and vocals treated so heavily it sounds like an industrial shredder so Tobacco can basically go “Hey, do you like well written pop songs that appeal to many people and give you pleasure? You do? Well YOU SUCK!” Even the presence of similarly eclectic hipster overlord Beck on second track Fresh Hex and ninth track Grape Aerosmith can’t stop them from turning into electro-ish dirges with periodic burst of distorted insanity. Which is probably the point entirely.

And then something baffling happens on track eight. The songs called Heavy Make Up and for the first time on the record, we hear a song! With melodies! It sounds like a relaxed Prodigy and it’s a lot better than 90% of what passes for pop music in the charts. And after that the record gets immeasurably better, Six Royal Vipers floats in on a bed of synth arpeggio’s and treated vocals and sounds like something that could be played on <whisper it> the radio. The fact that this comes after half an album of aural insanity makes this sudden lurch into accessibility makes it, perversely enough, even stranger than what came before.

You see, any fool can muck around with a synth and come up with strange noises that a hipster will go on to say is “pretty cool”, but to write an accessible song that manages to sound suitably off kilter is an awful lot harder, and songs like Creepy Phone Calls pull off that divide pretty perfectly. However, this is still a record to listen to with your hand firmly attached to your chin, an album to impress others with your knowledge of. And no matter how accessible it may get, that is still missing the point of pop music entirely.

Silje New Album Out In September!