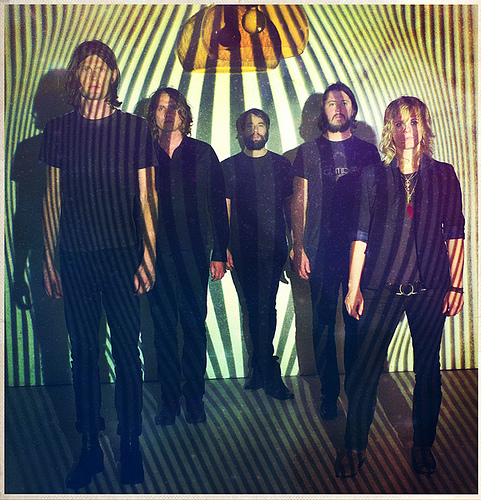 Revived record label Blue Horizon have announced it has signed Austin-based psychedelic rock band, THE BLACK ANGELS.  The Black Angels third album, and first release on Blue Horizon, is the highly anticipated Phosphene Dream, which is set for release on September 13th in the UK.  “Phosphene Dream” marks a giant leap forward for the band.  Produced and mixed by Dave Sardy (Oasis, Wolfmother, Black Mountain) over a period of six months in Los Angeles, the album shows off both sonically and musically a bold new direction for The Black Angels, a fresh take on the neo-Psychedelic movement they’ve been at the forefront of for years.

While past albums Passover and Directions to See a Ghost were recorded in the bands hometown of Austin, Texas, the process involved on making Phosphene Dream pulled the band out of their comfort zone and forced them to look at songwriting and recording in a way they never have before.  Years of non-stop worldwide touring had turned the band into a tightly wound unit, and those years of work are all on showcase here.  The band plans to celebrate the release with more years of touring, starting at the end of August where the band will be playing the Reading and Leeds festivals in the UK, Rock en Seine in Paris, and the highly coveted Jim Jarmusch curated stage at ATP in NYC.  An announcement of their full fall touring plans will be coming shortly.

The deal also serves of particular importance as it marks the first band signed to the label since industry veterans Richard Gottehrer, co-founder of distribution company The Orchard, and Seymour Stein CEO of Sire Records (WMG) announced it’s revival earlier this year at MIDEM. Blue Horizon was founded in the late 1960’s, the legendary Blues label was best known for discovering acts like Chickenshack and Fleetwood Mac. Seymour Stein commented, “Great musicianship and performers, mesmerizing vocals, and songs that penetrate the subconscious.  That’s the best way to describe Black Angels, our first signing to Blue Horizon records.  In everyway the band is perfect choice to re-launch to this iconic label.”