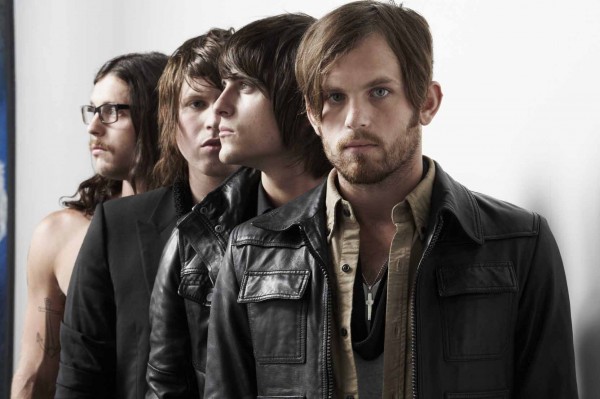 The Nashville band headlined the 60,000 capacity event, with support coming from the likes of The Drums and The Black Keys. The working titles of the band’s new songs aired included ‘Southbound’, ‘Immortal’ and ‘Radioactive’.

Speaking of the tracks, front man Caleb Followill told the crowd: “Since we saw you guys last we went and made a record. That’s what we put a lot of work into. Just yesterday some people at the record label got to hear a couple of songs from it. I don’t know if they want us to play a bunch of new songs but I think ‘fuck it’ – were gonna do it!”

A cover of Pixies’ ‘Where Is My Mind’ also went down well, though some of the crowd mistook the track for a new Kings Of Leon song. Later in the set, the frontman became visibly emotional at the sheer scale of the show, which saw the band play tracks stretching right across their back catalogue.

“It’s been one of the greatest experiences of my life,” Followill told the crowd. “Thank you all very much. One of these days, when we’re all fat and bald…or balder, and we’re sitting in Tennessee telling all our kids about all the great things that happened to us, this is gonna be one of those.”

Earlier in the evening, The Black Keys had warmed up for Kings Of Leon, playing for almost an hour as the sun began to set over the park.

With a set relying heavily on new album ‘Brothers’, Dan Auerbach and Patrick Carney were joined by a full band for the majority of their set, with each stagebound member wearing a suit. Auerbach, who also wore sunglasses throughout was in particularly chatty mood, commenting on the audiences receptiveness throughout. Towards the end of the band’s set he also paid tribute to Kings Of Leon, saying:

“Thank you so much for putting up with us here. I’d like to thank our good friends the Kings Of Leon for letting us play,”

Third act on the bill The Drums also drew a sizable crowd and went down well with the audience, despite front man Jonathan Pierce telling NME beforehand that he felt that the band “stuck out like a sore thumb” on the schedule.

Nevertheless, the New York band powered through tracks from their debut album ‘The Drums’, with Pierce pausing between each to state his appreciation for the positive reaction of the audience.

Kings Of Leon also had their touring friends The Whigs and The Features open for them earlier in the day. The good weather ensured that the area around the Hyde Park stage was well populated for each act despite their early stagetimes, and both went down well. The Whigs, who have recently supported We Are Scientists in the UK used the occasion to big-up their friends, telling the audience: “None of us would be here if it wasn’t for the Kings Of Leon,” to massive cheers.