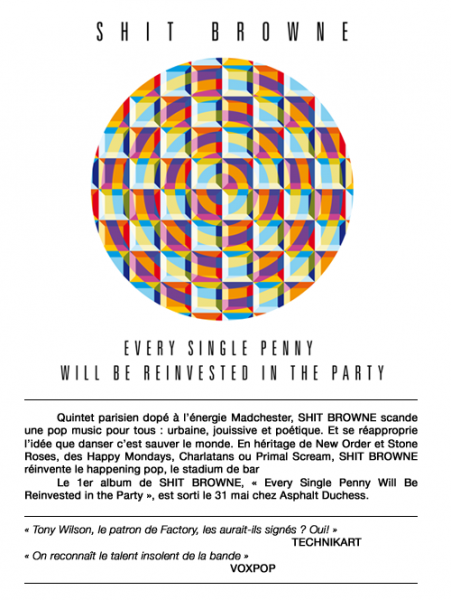 There is a lot to be said for album titles. To a fan or a journalist like me, they are the only sight into the music before listening to the music itself. And to a fan of George Orwell’s 1984, the title “Every Penny will be reinvested in the Party” brings to mind visions of a terrifying dystopian future that seems increasingly more likely in the constant machinations of the current political system… and as it turns out I’m wrong.

Shit Browne are a Parisian quintet made up of former DJ’s that sound like they would give there own grandmothers up to live in Manchester in the 1980’s. This is music that is mostly heavily indebted to The Stone Roses at their jangliest, The Monday’s at their most loose-limbed and a singer who sounds like Bobbie Gillespie at his most camp.  While this is a great idea it mainly sounds like a pastiche, like a wedding band covering The Charlatans with tacky panache. It’s when they drop the northern influences that things get interesting.

Case in point, third track Electronics. This track showcases the quintet’s background in electronic music, based around a pinging synth hook that sounds like the backing track to an awesome video game. Always a good thing. The guitars storm in and suddenly their stars align and they sound phenomenal, like an Oasis that were actually as far out as Noel Gallagher claimed they were going to be. On the other side of the spectrum “She’s a Party” sounds a bit like The Stooges in its 44 second (!) punk rock stomp. Unfortunately this song also shows the weak link of the record in spectacular fashion, the vocals.

Singer Sebi Browne is a frustrating singer. He can sing, very well on tracks like Teenage Fanclub tribute Betty’s Cake but on other tracks he comes across slightly pathetic, either not bothering to even try hitting the right notes or so weak that he should reconsider being a singer in general. And it must be said, he gets the balance wrong more times than right.

All in all though, the record does have some great peaks, the aforementioned Betty’s Cake being utter bliss throughout and album closer Winter Collection being a great tip of the hat to Factory records in the first half of the 80’s. And that is what the key to this record is, these guys are definitely confident. You would have to be to open such comparisons with bands that defined a generation. If you take it on its own merits it is a good record with some annoying quibbles throughout, but if you want to listen to this sound done better, listen to the influences, rather than the product of them.