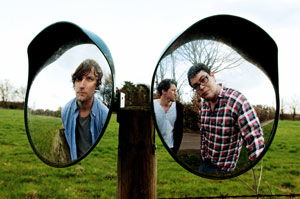 From the opening chords and swirling melodies of ‘Codeine’, I know immediately who Larsen B reminds me of. Piano driven melodies, warm vocals, tender-hearted cabaret tinged style… if they do not own at least one Duke Special album, I will eat my hat. (And anyone who knows me will vouch for that as being a strong oath.)

However, it has to be said that despite the obvious starting point, ‘Musketeer’ is a largely solid album with a charm of its own and a much heavier lean on folk and some more modern instrumentation to compliment the usual esoteric jumble of sounds to lift their music above the crowd. ‘Codeine’ in fact is an almost perfect introduction to the album, giving the listener a clear indication of exactly what will be taking place. Everything comes down from an old radio to the present day, brining with it some lovely twirling melodies.

‘Marilyn’ is a hop-skip song of infatuation, and ‘Atlantis’ a quirky lament showcasing a banjo of all things to pluck at the heartstrings of the listener. The strangest moment has to be ‘Red Indians And Witches’, which resembles a cross between 60s pop and an acoustic Sunny Day Real Estate b-side covered by a folk band.

And yes, it seems that these days we are unable to have a folk-influenced quiet pop album without a ukulele track, and here it is ‘Robots Learn To Love’. Thankfully, this is one of the stronger tracks on the album, a whimsical and entertaining little train of thought that gently takes the listener on a flight of fancy, and above all, the ukulele is neither ironic nor does it dominate the piece, the quiet strumming still providing a framework for the other instruments to play with.

‘Drown By The Sea’ is another notable track, a magical waltz that is almost achingly cute and yet somehow stately, the sturdy bass and drumkit providing depth and weight to the tinkling piano and sweeping strings. ‘Magnify’, on the other hand, is a fluid hybrid of dreamiest pop and Victorian music hall vaudeville, soothing upon the ears and heart. The closer, ‘Kindling’, is another fluttering folk song, with a deep vocal and weeping lap steel guitar.

My only real bones with this record would be that some tracks drag a little bit. Not necessarily in length (‘Codeine’, despite being over four minutes, flies by with grace and charm aplenty) but the idea seems to tail off during the last thirty seconds here and there.

Throughout ‘Musketeer’, the listener is invited into Larsen B’s hazy sepia world of love, loss and all the spaces in between where warm fuzzy feelings happen. It is sweet without being sickly, melancholy without being maudlin. It is heavily folk-pop and by all means sentimental as a movie marathon of Romeo and Juliet derivatives, but if you are in the mood to have your heart charmed and melted, this is the album for you.