Beat the Radar – By the Sea/Miracles 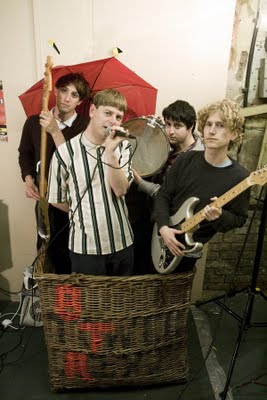 I really don’t want to make a habit of this but I find myself agreeing with what The Daily Mirror has to say. The accursed tabloid said “Pucker up, Indie Rock, here comes a kiss of life.” And listening to Beat the Radars new single, they are actually right! It’s been a long time since an indie band has called bands like The Fall, Sonic Youth and Husker Dü (y’know, actual indie bands?) major influences and after the great Pigeon Detectives disaster of 2007 it’s a genuine delight to see.

“By the Sea” is a textbook slice of what they do, breezy indie pop with Johnny Marr styled Guitars, a whopping chorus and a wistful, carefree attitude toward life. And a massive half tempo breakdown that should belong to Black Flag but they pull it off with surprising panache. “Miracles” takes those same features and pins them smartly onto a massive drum break and a Pixies styled bassline, it’s not quite as good as it’s A side but still a great thing to see an guitar band doing after the advent of Landfill indie. A great record by an exciting new band, what’s not to love!

Cyco Miko/Infectious Grooves – Funk It Up & Punk It Up: Live in France ’95