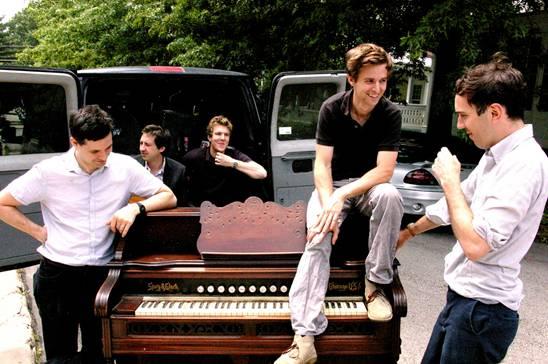 The Walkmen and will be releasing their forthcoming album ‘Lisbon’ on Monday 11th October. In celebration of this we are offering the first taste of this truly great record in the way of ‘Stranded’!

At the halfway point of Lisbon, the sixth studio album by esteemed rock band The Walkmen, front man Hamilton Leithauser sings, “Victory, right beside me / Victory, should be mine.”  Arguably the album’s sonic climax, the chorus also serves as an appropriate mission statement for a band on the receiving end of so much admiration but so many false starts.

Formed in 2002 by members of celebrated indie rock bands Jonathan Fire*Eater and The Recoys, The Walkmen burst through New York City’s crowded garage rock scene with their debut album Everyone Who Pretended To Like Me Is Gone.  Recorded in the band’s analogue Harlem studio, Marcata Recording, the album captured public and critical attention for its freshness, use of atmosphere, and vintage instrumentation.  Where the debut focused on restraint and sonic exploration, the band’s highly anticipated follow-up Bows & Arrows tightened their sound and reached for grandeur.  It would spawn indie rock anthem “The Rat” and inspire numerous young bands to cut their hair, button up oxford shirts, and ditch their converse.  Two albums followed including 2006’s A Hundred Miles Off and the band’s song-by-song cover of Harry Nilsson and John Lennon’s 1974 classic Pussy Cats.  The former polarized fans and critics while the latter served as a last-call to Marcata Recordings – relinquished that year in a Columbia University land grab.

Two years followed.  Band members relocated to Philadelphia resulting in countless rides between cities on Chinatown buses.  During this time guitarist Paul Maroon taught himself the viola and trumpet leading to a sonic breakthrough.  The cold and standoffish tone run aground in recent years was abandoned for a warmer, more personal, and real approach.  Heralded as a return to form, 2008’s You & Me catapulted the band back into the limelight landing on countless year-end “best of lists” including NPR, Pitchfork, Paste, Stereogum, Time Out NYC, among others.  The album received five stars from English daily The Guardian who described the album as “intimate, intense and beautiful,” while Pitchfork called it “the sound they’ve reached for since the beginning.”

How do you follow an album as groundbreaking and heartbreaking as You & Me?  The band spent two years driving between warehouses on Philadelphia’s Girard Avenue and Brooklyn’s Gowanus Canal where they would write the majority of Lisbon.  It wasn’t until a few inspiring trips to Lisbon, Portugal however that they established the album’s tone.  “None of us had ever been there, and we were really blown away by the place,” says Leithauser.  “The topography and architecture are stunningly handsome.  It was a trip that outshone a lot of others.  We’ve never had much luck in Europe, and the Portuguese were surprisingly accommodating.  I think those two trips really helped keep us motivated while making this record.  We named the record Lisbon as sort of a ‘thank you’ and a small tribute.”  Adds Leithauser, “early on, we had a whole batch of songs based on this New Orleans-style horn playing that (guitarist) Paul (Maroon) was working on.  The track ‘Stranded’ is the only one that actually ended up making the album though.  I think it was maybe the second song we wrote for Lisbon, so it sort of exemplifies our sound from two years ago.”  In fact, the band recorded around twenty-five songs for the album, soldiering through many disparate phases.  “At one point, I thought we were making a country record,” says bassist Walter Martin.  “There was another period where most of what was happening were these very simple songs with just delay, quiet guitar, and singing,” adds organist Peter Bauer.  The end result draws from each phase.  The simple sounds remain drawing from early Elvis and Sun Records for inspiration while the heart of the album adds fast bashy drums, subtle vocal harmonies, and galloping guitar lines.  “We had all these moments but really struggled to find the sound that set it apart,” says Bauer.  Standout tracks “Woe Is Me” and single “Angela Surf City” made it through several permutations before finding their way back to the wild primitive tone of their original 8 track recordings.  These are real barnburners.  Set beside left field moments like the Sinatra-esque “While I Shovel The Snow” and the album’s epic closer and title track, Lisbon is the band’s most coherent work to date.  “Everything on this record was a real surprise for us,” says Bauer.  “And that’s all we ever set out to do.”

The album was recorded in two instalments – the first at New York’s Gigantic Studios with You & Me engineer Chris Zane and in a couple of sessions in Dallas, TX with John Congelton who produced albums by St. Vincent and Explosions In The Sky. Lisbon brings a raw, fiery rock n’ roll spirit to the songwriting complexities of You & Me. If You & Me was a return to form, Lisbon feels like their moment.