The Qemists – Spirit In The System 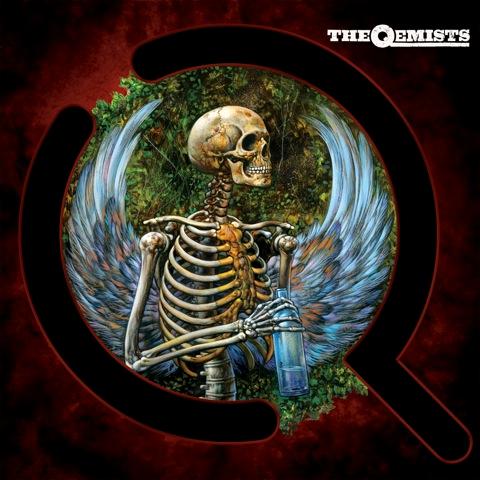 Boasting a tongue-twisting name and enough guest artists to successfully launch a small festival, The Qemists have just released their second album, ‘Spirit In The System’. And the fact that they have Enter Shikari as guest artists might give you some idea of what they’re all about.

The album starts with the chaotic, throbbing opening track ‘Take It Back’, featuring the aforementioned St Albans noisemakers. Slotting between the guests’ breakneck, aggressive synth screamo-metal and The Qemists’ own maniacal drum and bass, it is definitely an ice-breaker and opinion-divider of a song. The synths fight for room with layered vocals (both screaming and clean) and chainsaw guitars and most notably, machine-gun metalcore drumming. The musicianship is admirable, lurching around whilst retaining a vice-tight rhythm, however it does feel somewhat drawn-out – four minutes twenty seconds in total, and once it hits about three minutes, it feels like it has run out of ideas.

Things calm down on ‘Hurt Less’, the synths attempting to give the impression of a soaring string section. The guest vocals courtesy of Jenna G are the product of a tuneful voice, but the processing job inflicted upon them isn’t very helpful. It makes them fit the manic rave style The Qemists are aiming for, but in the process they are rendered robotic, and the result is a moment of inhuman chaos that, while undoubtedly danceable, is not the kind of thing you’d necessarily sit down and listen to, despite the lyrics pointing to it wanting to be a more introspective song. ‘Fading Halo’ later on suffers from a similar fate, leading me to wonder if The Qemists feel their listeners are unable to take a track seriously without manic rave breaks every minute or so.

‘Dirty Words’ picks up the pace again with throbbing single-note bass and jittering electronics building into pounding cymbals and some vocals which, for the first time in the album, genuinely fit the context of the music they’re set to. The Qemists have a better handle on their own style here, harnessing it into controlled bursts of aggression and thumping beats and even a well-executed rap bridge leading to an explosive catharsis, a concise and enjoyable three minutes. If you only listen to one track off this album, I would recommend this as being the one.

Both ‘Renegade’ and ‘The Only Love Song’ have a similar issue – the vocals and music feel thrown together at the last minute, the former channelling an abrasive Daft Punk via hip hop and the latter utilising a very effective echo on the drums, allowing the synths enough room to pulsate against the percussive hurricane. However the vocals feel tacked on at the last minute, which is a shame as both tracks have clear potential, especially ‘The Only Love Song’ and its sonic expanse.

On ‘Life’s Too Short’ the elements once again gel to create something that is ready for lively clubs and yet doesn’t alienate home listeners. The sounds are all tied up firmly, the vocals integrated fully into the enjoyable glam-rave stomp. Totally throwaway club fodder, and self-awareness of this fact lifts it above its station.

However, this lightbulb moment fades in the air raid siren glitchiness of ‘Apocalypse’, where once again the fact that they can make a lot of noise happen all at once overwhelms the other elements at work.

The closedown, ‘Your Revolution’, is once again an example of The Qemists harnessing their anarchic synthesiser rock to its potential, using dynamic force and layering the buzzing synths like bricks in a house to create a multidimensional pandemonium that whilst perhaps not what you’d want to have playing in the living room, is a more than serviceable soundtrack to a night out.

Overall, The Qemists have many ideas, however they can’t quite harness them well enough to create something truly listenable. Instead, it comes across as isolated moments of musical ingenuity and enjoyment amongst a pile of unfortunately overcrowded sounds. If you’re into anarchic dance tracks with a fierce edge, I would recommend ‘Dirty Words’, ‘Life’s Too Short’, and either ‘Take It Back’ or ‘Your Revolution’, depending on your views on screamed vocals.  The rest of the album just doesn’t feel solid enough.

Son Of A Kick – Revolution B