PANTERA to release expanded edition of ‘Cowboys From Hell’ 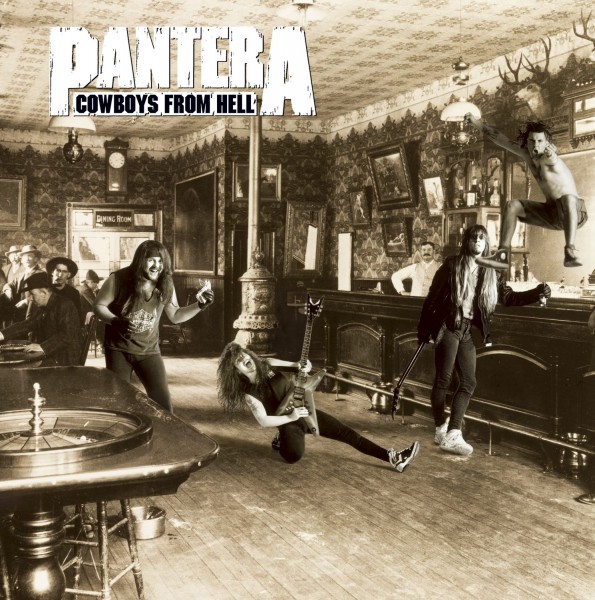 Pantera found its growl and groove on COWBOYS FROM HELL, a landmark album whose bone-powdering intensity, razor-sharp riffing and pummeling rhythmic assault represented a turning point in modern metal when it was released in 1990. More than just Pantera’s major label debut, many consider this album to be the official debut of the Pantera lineup with singer Philip Anselmo, guitarist “Dimebag” Darrell Abbott, his brother, drummer Vinnie Paul and bassist Rex Brown.

To celebrate the 20-year anniversary of COWBOYS FROM HELL, Rhino rounds up a three-disc Ultimate Edition, a three-disc Deluxe Edition, and a two-disc Expanded Edition. All three editions include a newly remastered version of the original album along with unreleased and rare live performances from the “Cowboys From Hell” Tour.

The Ultimate and Deluxe Editions will also feature a disc of unreleased demos for nearly every album track, plus, “The Will To Survive,” a previously unreleased song recorded during album’s sessions.

“’The Will To Survive’ is a great track. With so many killer songs, it was hard to pick and choose the ones that should make our major label debut,” says Paul. “After hearing it for the first time in about 20 years, it’s a pretty stellar performance and I am definitely proud that it will see the light of day for all the die hard Pantera fans around the world! It shows the true musical diversity of the band at that time!”

The Deluxe and Expanded Editions of COWBOYS FROM HELL will be released September at all retail outlets, including www.rhino.co.uk

Along with the remastered version of COWBOYS FROM HELL, all three sets include a disc of live music recorded during the tour for the album. It begins with seven unreleased performances from Pantera’s September 15, 1990 appearance at the Foundations Forum metal convention in California, a show recorded for radio broadcast but never released commercially. The remainder of the disc contains the five-song EP Alive And Hostile, a collection of performances recorded in 1991 at the Monsters of Rock festival in Moscow that was previously available only in Australia as part of a 1994 boxed set.

The Ultimate and Deluxe Editions of COWBOYS FROM HELL include a third disc that contains the previously unreleased “The Will To Survive,” along with demos for 10 of the album’s 12 songs, including early versions of the title track, “Psycho Holiday,” “The Art Of Shredding” and “Cemetery Gates.”

After being turned down “twenty-eight times by every major label on the face of the earth,” ATCO Records A&R rep Mark Ross saw the band when Hurricane Hugo stranded him in Texas. The rest, as they say, is history, including another seven years and over a million miles of touring for COWBOYS to be certified Platinum (one million album sales) by the RIAA.

The album’s liner notes include essays by each of the band’s surviving members, producer Terry Date, and the aforementioned Ross. Recalling the first time he saw Pantera, Ross writes, “By the end of the first song, my jaw was on the floor. The sonic power of it all—the attitude and the musicianship—blew me away. Basically, you had to be an idiot to not think they’re amazing. I mean, how could you see these guys and not think, Holy shit!? ”
COWBOYS FROM HELL Track Listing

† Unreleased in the U.S.