This is the Mantra of the Justice Force 5. Comprised of a half-man half-cow hybrid, a time travelling scientist, a Lucha Libre vampire, a black man trapped in a white man’s body, a hard-as-nails dark knight vigilante and a gender confused, spandex clad alien, they are the world’s greatest superhero rock band/vigilante group.

Formed in Brighton 2008, these 6 individuals were bound together through a shared love of justice, spandex and guitar riffs. Their mission: to save the world by combining elements of hard classic rock and synth-pop, to produce loud, catchy, hook ridden songs that kick ass like Van Dam and rock like Van Halen. Inspired by bands such as Kiss and the Flaming Lips, the Justice Force 5 have become known for their over the top live performances which typically feature confetti cannons, costume changes, robots, and live musical battles with the groups arch nemesis, The Organ Grinder.

Since the band came to fruition, they have written and recorded an albums worth of original material, sold out the 600 capacity Brighton Coalition for their self released “Save the world” EP launch, headlined the 2009 Lexapalooza festival (Previously headlined by Get Cape, Wear Cape, Fly and Frank Turner) and appeared in the feature length superhero documentary “Superhero Me”.

In June 2010 London label Xtra Mile Recordings (Reuben, My Vitriol, Million Dead, The X-Certs, Frank Turner) will be releasing the band’s double A-side “Vingle”, featuring the songs “Fight The Fight”, “J.U.S.T.I.C.E Force Dance” with their accompanying videos. To support the release, The Justice Force 5 will then begin touring in July for the 2010 “Tour De Force” taking their bombastic live show to various cities throughout the UK. 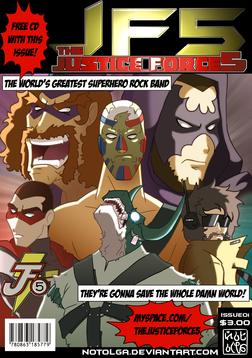