Everything Everything ‘Man Alive’ Glitch Mob album mash up

With just over ONE WEEK to go until you can get your paws on the full debut album from Everything Everything, the band have enlisted none other than L.A’s hottest production collective The Glitch Mob to give us a fast and furious taster of what’s in store with their mash up of ‘Man Alive’ – coming in at just over 7 minutes.

“We’re really excited to give our album to glitch mob to see how they would interpret it, and how they would create a taste for the mood of it. We’ve been fans of glitch mob for a while and we like the way they’ve inserted glimpses of their own style into Man Alive. Hearing the album in short-form like this has re-excited us about the release and put a new sheen on it. Thanks mob.”

The Glitch Mob sound has always been a continually mutating concept, always pushing new boundaries as the trio evolved. Their 2010 album Drink The Sea arrived after years of intermittent yet acclaimed releases—spanning widely passed-around Internet mixtapes like the infamous Crush Mode to official remixes for TV On The Radio, Ed Banger’s Krazy Baldhead and Evil Nine featuring El-P.

Now they’ve worked their magic on our very own boundary bothering alternative poppers.

You can pre-order the album now from HMV and be entered into a comp to win tickets to the sold out album launch on 2nd September: http://hmv.com/hmvweb/navigate.do?&pPageID=4798

Don’t forget to catch EE at Reading & Leeds and Bestival.

Night Of Sevens – Abused and Unused 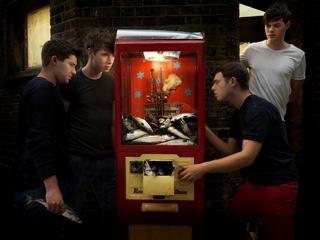