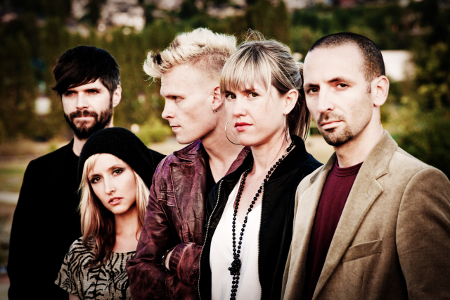 Vancouver Canada’s Mother Mother will release new single ‘Body of Years’ on September 20th, backed by B-side ‘Touch Up’. Vocalist / guitarist Ryan Guldemond says the track is “a Gouge Away meets Billie Jean inspired rock anthem about reconciling with, or perhaps NOT reconciling with one’s dirty little secrets from one’s sordid past, and of course, all the inherent guilt that comes along with all of that. Something we learned from our parents and good friends.”

Mother Mother have generated a lot of support from all sides in the UK after the release of their album O MY HEART and the recent visit with performances at The Great Escape and Liverpool Sound City amongst others.  Their modern pop/rock with beautifully bent portraits of vocal harmony, clever, offbeat lyricism, and dynamic instrumentation found many fans. Their sound is best encapsulated on their sophomore album, O My Heart, produced by Howard Redekopp (Tegan and Sara, The New Pornographers).

First two singles HAY LOFT and O MY HEART picked up broad support from NME Radio, Absolute Dabble with a wide range of DJs giving their support on BBC 6 MUSIC and Radio Two, where O MY HEART was voted to become RECORD OF THE WEEK.

The support didn’t stop at radio as also press gave it wide support with a 4 **** review in Q and the song O MY HEART was part of the best tracks of the month selection.  The band won VIDEO OF THE DAY accolades and NME.COM as well as DROWNED IN SOUND have been strong supporters of the band.

Watch the video for Body of Years: