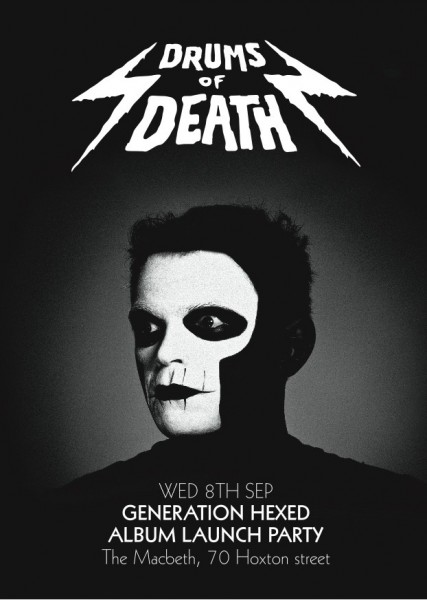 Since the eclectic, glitchy paranoia of his debut EP Drums of Death Steps Into The Ring, Drums of Death AKA Colin Bailey has deftly ridden the slipstream to the top of the UK’s dance fraternity, being nominated for DJ Magazine’s ‘Best Newcomer’ award, touring the USA and Europe with Hot Chip & Peaches (for whom he co-wrote her latest album’s title track I Feel Cream), remixing Franz Ferdinand, Alphabeat, Tricky, Mika & Hot Chip and recently gracing the front cover of iDJ Magazine. Finding some time off during the harsh winter months of early 2010 he started work on his debut album Generation Hexed, which is now set to be unleashed on the world on 20th September.

The launch party for the album takes place at Shoreditch’s Macbeth, and with a line-up boasting not only a live performance from DoD himself, but sets from the 2 Bears (Joe Hot Chip & Raf Daddy), Greco-Roman Sound System, South London soundboy Martelo, Deadfish house impresarios Mowgli b2b Solo Rinse FM’s Oneman and the Girlcore DJs mean you know this is one mid-week rave that’s guranteed to go off. Entry is completely free, but arrive early as this is without doubt a roadblock waiting to happen.