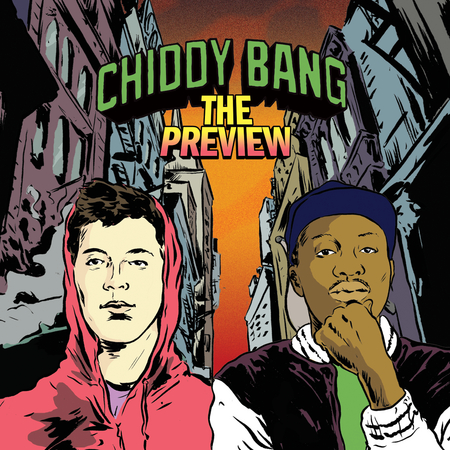 Chiddy Bang release an eight track prequel to their debut album entitled ‘The Preview’ on October 11th. ‘The Preview’ documents the incredible journey the band have had over the last year emerging from underground US blog darlings to become U.S hip – hop’s leading lights.

Having met at Drexel University in 2008, the multi- talented duo uploaded a mix tape entitled ‘The Swelly Express’ on to Myspace – an album of heavy party jams which circulated around the American college circuit like wildfire and led to over 100,000 downloads in a month. Having signed to Parlophone, the band released their debut single, the MGMT – sampling hip hop anthem ‘Opposite Of Adults’ earlier this year. The track quickly climbed up the charts across the world selling over 120,000 copies in the UK alone and the video receiving more than 6 million views on you tube. It confirmed that Chiddy Bang could unite the mainstream as well as the underground; making the b-boys sing, the indie kids bounce and the pop lovers rock. Hip Hop moguls in the U.S began championing the band with Kanye blogging about them and Jay- Z, Snoop Dogg. Kid Cudi and 3 Six Mafia inviting them to support their live shows. So ensued worldwide tours, sold out headline shows and a hectic promotional schedule that left the duo little time to fulfil their vision for their debut album. ‘The Preview’ is a sample of things to come whilst the band knuckle down over the next few months to record their debut album, ‘Swelly Life’ due for release early 2011.

As Noah puts it, “The main purpose of this release is to give our fans some new music whilst we finish recording our debut album, ‘Swelly Life’. It’s called ‘The Preview’ because it gives listeners a glimpse of what’s to come on Swelly”

Recorded over the last 6 months in L.A and New York ‘The Preview’ is an insightful look into to the many things the band have experienced over the last year as well as the personal battles they have experienced with the glamour of being in a band. The prequel features an accomplished breadth of styles and some fantastic collaborations including Pharrell, who co-produced new single ‘Good Life’, Q-Tip who features on the fierce dance floor-friendly dubstep ‘Here We Go’ and Darwin Deez who features on the manic electro curveball , ‘Bad Day’.

‘The Preview’ is sure to cement Chiddy Bang’s status as American hip hop’s brightest musical prospects.

The Good Life (co-produced by Pharrell)

Chiddy Bang support Tinie Tempah throughout the UK in October.  Dates as follows: