The Jim Jones Revue – Burning Your House Down 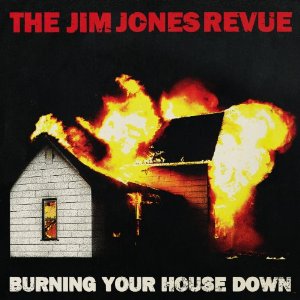 Imagine it’s 1957, and you’re watching Little Richard and his supporting band hammering out “Tutti Fruti”, then a roadie from the future jumps up on stage and gives the guitarists and bassist all distortion pedals. Just take a moment to imagine that sound, and then go out, buy “Burning Your House Down” by The Jim Jones Revue and prepare to listen to over half an hour of the same genius I just implanted in your mind.

The typical Garage Rock feel of the album is overwhelmingly present from the first verse of Dishonest John to the last scream of Stop the People, with sawing guitars and distorted bass layering nicely under the gravely tones of Jim Jones (formerly frontman of Thee Hypnotics) all nicely rounded off by a clear drum set. The piano is really what makes this band stand out in my eyes; for a band which debuted only 2 years ago, it is astounding that one could have so authentically replicated the playing style ever-present if 50’s and 60’s rock and roll. The 12 bar blues could not have been brought back to the forefront of my mind by a better band. I would call the execution and mastering of this album elegant, however nothing about this album is elegant; Burning Your House Down takes elegant down to the docks in the middle of the night for a sleep with the fishes. The mastering and production however is angry, and perfect, the balance of all tracks is perfect with a slight weighting on the vocals of Jones.

High Horse is the single of the album, released on the 23rd of August. It has a very prominent blues chord progression, as do most of the other songs for that matter; however here is where I think it truly belongs. The guitar’s crunchy drive really nails you in place whilst the discordant piano and heavily distorted vocals leave you feeling slightly aurally assaulted, and wanting more. The lyrics themselves are as angry and direct as you’d expect from a genre of music considered by some to be a form of protopunk.