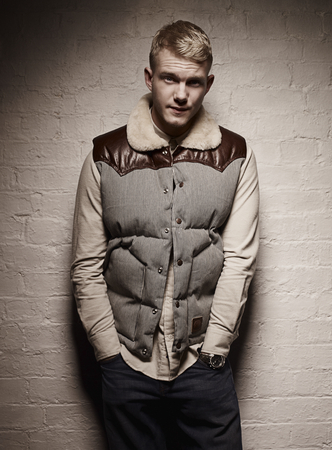 ED DREWETT has established his own impeccable chart credentials without having even yet released his first single. The 22-year-old Essex singer-songwriter first came to our attention when his tones graced Professor Green’s #3 hit ‘I Need You Tonight’, this success was followed by him co-writing ‘All Time Low’, the #1 smash from new lad-band sensation The Wanted.

Now ED DREWETT looks set to be one of this year’s biggest breaking stars with the OCTOBER 25TH release of his debut single ‘CHAMPAGNE LEMONADE’ through Virgin Records. Full of charismatic lyrical twists which emphasise his cheeky persona, ‘CHAMPAGNE LEMONADE’ is the first track to be taken from Drewett’s debut album due for release in March 2011. The musician has called upon an enviable collection of expertise for the album with producer/writer collaborators including Greg Kurstin (Lily Allen), Cutfather (Kylie Minogue, Christian Aguilera) and Fraser T. Smith (Cheryl Cole, JLS). The debut single is produced by Tim Powell, his first since leaving the Xenomania stable.

ED DREWETT will be joining Professor Green as main support on his October UK tour which culminates with a London date at Koko on October 19th.