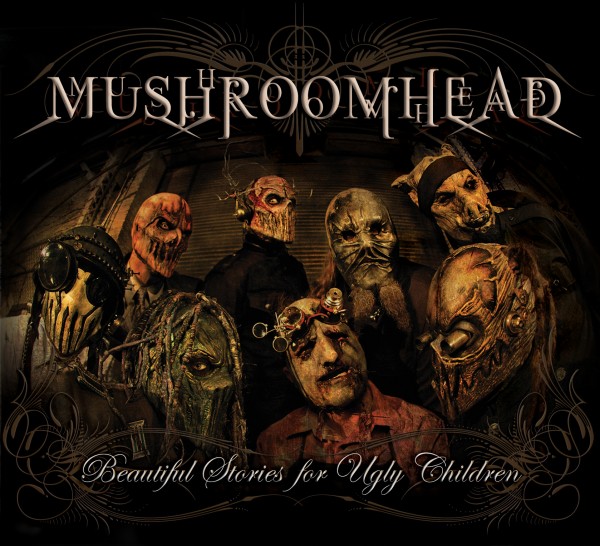 Cleveland, Ohio 1993 and so began an incredible journey. Seventeen years and three ‘Behind the Music’s’ worth of good and bad experiences, Mushroomhead is poised to release their Juggernaut Creation – “Beautiful Stories for Ugly Children”. Drummer and producer Steve “Skinny” Felton states ‘BSFU is truly a vice for everyone, the widest range of emotions ever recorded by MRH!  Musicians today are half psychotic, half glutton for punishment. Mushroomhead has persevered through things that would have ended much weaker entities. Yet these things are taken in our determined stride, as par for the course. These truths shine through on Beautiful Stories For Ugly Children!”

Mushroomhead began performing incognito to prevent any preconceived ideas of what the band was about. After a short time, a rabid loyal following catapulted MRH to must see status and their DIY determination made them impossible to ignore.  After a string of self releases; Mushroomhead (1995), Superbuick (1996) and M3 (1999), the Industry came to call. Eclipse Records released a compilation cd XX  before Universal Records remixed and re released XX (2001) and XIII (2003). The band and label amicably split shortly after. Savior Sorrow 2006 saw the band join forces with label Megaforce Records which will now together release, Beautiful Stories For Ugly Children, called by all parties involved  the best work by Mushroomhead to date.