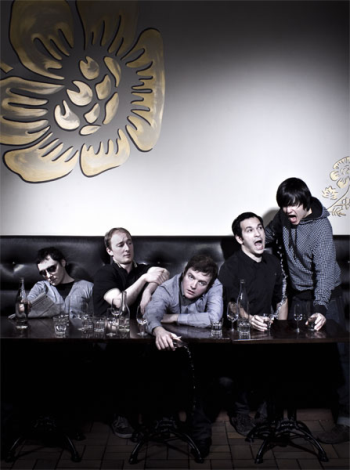 SHOWSTAR release their new album ‘Think Ringo’ through the Rainboot (label) [UK] on the 27th of September 2010.

Since the early Noughties, Showstar have been searching for the perfect pop song, a song that will capture
the hearts and minds of housewives, students, motorists stuck in traffic jams for days, your granny, those
young emo types that wear absurdly tight trousers, and anyone else with the means to play a CD! A decade
in and they’ve struck gold again with ten perfect pop songs… although thinking about it, a few of them might
scare your granny a bit.

Hitherto Showstar have been able purveyors of strikingly melodic pop rock, but Think Ringo, the band’s third
full-length release, is hell-bent on upsetting the apple cart: in short, it gets in your head alright, but messes
you up a bit in the process. Weaving a darker, more insular sound into their solid pop aesthetic they take on
grotesque stadium anthems by twisting in an off kilter peculiarity and discord. The results are brilliantly
subversive for a band whose easy-going appearance conceals insidious melodies, devastating cynicism and
mild paranoia.

Having delivered several radio hits in Europe and shared stages with The Rakes, The Thrills, Maximo Park,The
Charlatans, and Wild Beasts, 2010 is set to be a big year for Showstar.
Think Ringo is available in the UK from 27 September 2010, was produced by Gareth Parton (The Go! Team,
Foals, Beta Band, Killers, The Rakes), was recorded in London and Belgium, and follows their 2006 album
“<.>” (‘Dot’).