Goodluck Jonathan – This Is Our Way Out EP 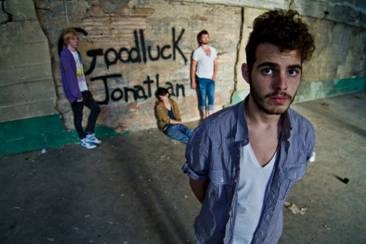 This Is Our Way Out is the debut EP of Brighton indie rockers Goodluck Jonathan. From the intense opener Bruises Disappear to the quiet sense of desperation that pervades Light Burns My Eyes, the whole thing is an incredibly emotional affair. This is not to say it’s melodramatic, though. Vocalist Nick Brookes exercises a certain amount of restraint over his melancholy, to great effect – his lyrics have just the right level of angst, never falling into the theatrical. The sound itself is very well done – Brookes’ vocals never seem at odds with the rest of the band’s efforts – on the contrary, the two are in almost perfect synthesis. In Brookes’ more introspective moments, the sounds that surround him are suitably strained and drawn out, and vice versa; Brookes’ displays of energy are reflected in his band mate’s complex, hyperactive backing. Guitarists Max Rothery and Jim Valentine in particular manage to create sounds ranging from claustrophobic to restless to withdrawn within the space of one song, all with a few well thought out guitar riffs. The record isn’t perfect, of course – though there’s definitely quite a bit of musical range within each song, after a while common themes do start to emerge, to the effect of making tracks appear to blend into each other a bit. This is a small qualm though with what is essentially a great debut, bringing to mind the kind of raw emotion and dark, edgy sound of bands such as Thursday and A Place To Bury Strangers. Excellent.