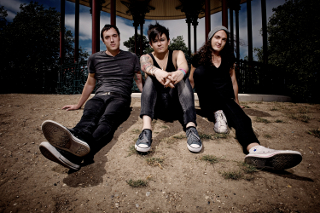 Soon after forming, WHAT NOW quickly developed a strong set of songs; realising they had crafted a sound that could appeal across the board, it was essential for them to take these songs and play them to the masses. Gig offers began to pour in and after a series of impressive shows, they caught the attention of festival promoters and national radio stations. Profiled festival slots and national radio play followed which increased their fan base overnight. WHAT NOW suddenly became one of the hottest bands in SA but naturally felt separated from the rest of the world. They felt drawn to take their band elsewhere to expand the band’s popularity internationally.

WHAT NOW relocated to the UK, settled into jobs and took some time out from band duties to become familiar with their new surroundings. In the summer of 2009 the band started to get attention from London industry folk and began to prepare for their debut release in the UK.

The songs which feature on ‘Take Control’ (the debut EP) are quite simply infectious, melodic and with the ability to appeal to the masses. After one listen you’d be forgiven for thinking the tracks were recorded in some fancy London studio… but you’d be wrong. The entire EP was made in a bedroom.  The release was produced entirely by the band themselves then mixed and recorded by vocalist/bassist Tyron Layley.

‘Take Control’ is set  for release on November 15th via digital download and 2 x Limited Edition CDs, which will each feature a different bonus track.