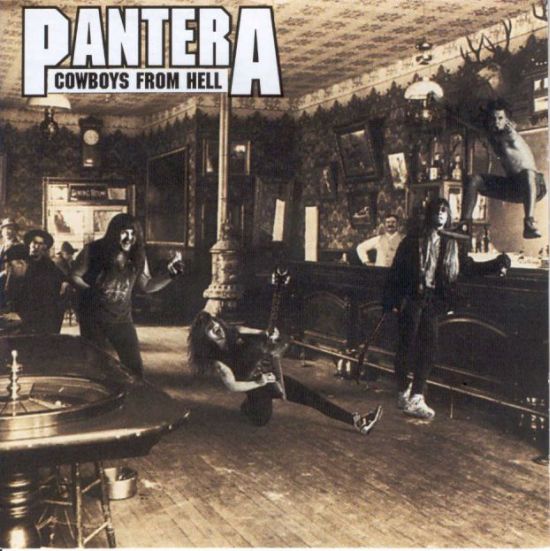 Pantera are a legend among metal, and ‘Cowboys From Hell’ is often considered their magnum opus as it were, writing half of the book on heavy metal as we know it today, and cramming as much of the other half as can be fit into skintight jeans. So of course, given this album’s status as one of modern music’s totems, the twentieth anniversary of its release sees it given the deluxe and expanded treatment.

Right from opening gallop to last shred, this album is every bit as feral and seductive as it was back in the day. The title track has lost none of its visceral impact as it lurches from borderline groove riffs to chugging to full-on metal shredding with aplomb, the band tight as the jeans they wear on the cover. The guitar work on display is the stuff dreams are made of in its psychopathic melodicism and unpredictable yet impossibly accurate rhythms, and the drumming is almost terrifying in the way it can hold together lightspeed kick-drums under a slow and menacing cymbal. The vocals are perhaps not the finest on offer, but they fit the music perfectly with a violent bark. The bass flawlessly holds up the lower end and offers rhythmic lunacy all of its own. Each song has had its jagged edges not smoothed but sharpened and bought into crystalline focus, allowing the tracks to have power anew over the unsuspecting listener.

Anyway, given that the majority of the rock world has already been subjected to treatises on this album’s greatness/over-rated-ness/etc either from the music press or by your pet metalhead (located within convenient distance to the pet hippie, pet punk and pet goth, of course) I am going to assume that most readers have heard most opinions on this album, and so to write a track-by track review would feel redundant. However, in addition to the steel-spiked gem of a main attraction, this release comes with two additional CDs of live tracks and demos. The demos are, as per usual, perhaps a preserve of the pure fans who know the material inside-out and take delight from hearing the songs stripped of the trimmings to reveal the working sinews and skeleton of the music.

The live CD features a compilation of the band’s ‘Alive And Hostile’ EP, as well as seven previously unreleased recordings. The EP material is much more polished, the saw-edged guitars feeling perhaps a little blunted by mixing, although the fearsome quality added by the reverb that is often a byproduct of live recordings adds a new dimension of menace and wonder to the awesome exuberance of a talented speed metal band playing live. The unreleased material is a much more raw affair, with a slightly less substantial sound, yet it feels much more even and natural, catching all the little gleams of unique performance and rough edges that can make a live album feel all the more intimate and all the more real and rewarding, if such adjectives can be applied to a band like Pantera. The new material seems almost rabidly eager to have its day in the sun, or at least blasting out from PA speakers in the sweaty atmosphere of a metalhead venue, and with good reason. The stage banter is Neanderthal at best, but the songs themselves spring out for the jugular like something possessed.

It might seem like a statement on our society and conservative creative climate that rehashes and remasterings of seminal albums are given more fuss than some of the up-and-coming talent that is struggling to keep its head above the surface, but at the end of the day, a good album is a good album. If you have even a passing interest in speed metal, this is one of the necessary albums to own, and given the amount of shiny little extras held within, this edition is a worthy purchase if you do not have it, or if you’re a big enough fan to hold interest in owning all the live recordings and demos possible.