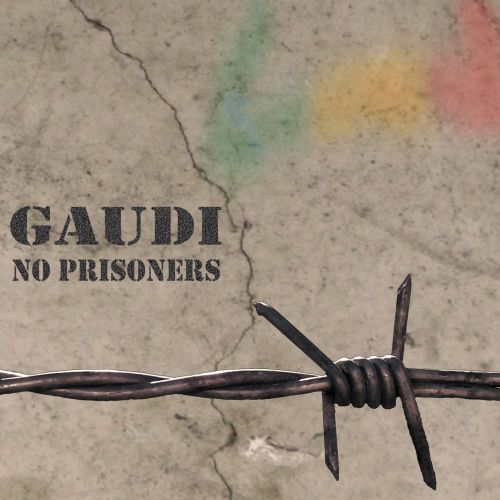 So if you were to ask me my opinion on the dub/dance/electronica scene as it is today, you would receive a blank, uninformed look. However, even I can recognise flashes of originality held within Gaudi’s latest album, ‘No Prisoners’.

Opening with syncopated guitars and afrobeat percussion, ‘Bad Boy Bass’ somehow mutated from a reggae-influenced electronic track into a heavy, grinding dance track, featuring a bass synth so dark and rough it is like having industrial sandpaper rubbed against your eardrums, as the layers of percussion and drum machine lay themselves smoothly over the glitched-up grind of the synth, creating an infectious and mesmeric opener.

‘There’s Enough’ starts with ominous spoken word and a sample of an idyllic street before booting in an energetic dance track with a politicised edge that is tempered by the seductive sliding bassline and strict drumbeat, keeping things on the side of palatable to the casual listener. The instrumental break is given a drum run in before introducing manic piano discord and cymbals in a queasy slowdown. The sample blends into the next track: ‘Serious Ting’, a woozy and clattering dub track with all you’d expect to hear: reliance on blurry bass, piano chords, echo effects, and the occasional strange happenings on synth. Halfway through, the synths go into club dance overdrive. However, this doesn’t quite save the track from feeling a bit throwaway. Similarly, ‘Barracudub’, with its pulsing synths and laconic bassline feels not so much like a call-out to the crowds as a piece of filler material.

‘Back To Baia’ picks things up with an enjoyable synth hook and a heaving ocean of seductive percussion. The addition of grinding yet organic bass to the equation sweetens a standout track yet further. The loops, hooks and riffs on offer here are among the best I have heard offered up in any offshoot of the genres, and the mixing and pacing experimentation is fantastic, switching from tinny synth-driven sound to full-blooded bass groove and removing and adding elements from the mix almost seamlessly, and the placing of these shifts is flawless. In stylistic contrast, ‘Oud We Think We Are’ is an ominous guitar-driven song, featuring one of the most menacing  riffs you’ll find outside of the spooky coven of rock and metal, the serpentine melody woven around more afrobeat percussion and edgy yet spaced-out synths. Halfway though, this moment of musical genius is blown apart by a cavernous synth and euphoric handclaps, turning the mood from sinister to cartoon joy with minimal effort, before switching back to the earlier mood with a greater synth emphasis.

‘No Time’ combines reggae dub and dance to create what ‘Serious Ting’ felt like it was trying to be: a hybrid cascade of noise and momentum, blending sudden guitar stabs and dub sound with rave synth speed, however Gaudi then slides this into a slowdown that feels almost blissful. Catchy, fun and yet still holding a sense of urgency and meaning, this is another highlight.

‘Hotel Calidonia’ is a surreal blend of funky rhythms, dance synths, and bagpipes, which thoroughly confused me, although it is not exactly impossible to get caught up in the mood. It’s not what I would put forwards as one of my favourite tracks on the album, but I found Gaudi’s bravery in such an instrumental choice admirable, and making it work to the extent it does is commendable and adds humour and fun to the atmosphere. Continuing with the unusual instrument choices is the combination of dance synths and beats with church organ in ‘Strictly Goodness’.

‘Brainwashed Again’ follows on with a gospel style choir before launching into high-energy dubstep, before ‘No More Blood’ grinds the listener into the ground with a pounding of concrete synth weight barely contained within a shifting, glitched-up rhythm that relies heavily on cymbals. However, this isn’t held together forever, and once again it lapses into pretty much the same track we’ve heard rehashed from the start.

Perhaps I’m not the most qualified to comment on this album given my unfamiliarity with the genre, however I have mixed feelings about ‘No Prisoners’. On the one had, the midsection triple whammy of ‘Back To Baia’, ‘Oud We Think We Are’ and ‘No Time’ are fifteen minutes of solid standout material, with strong innovation and a great series of hooks and beats to draw in the listener. Add this to the way that Gaudi is clearly trying to tread new grounds within the genre, and there are moments of great material. However, there is a lot of time in the album spent doing things that feel incredibly similar, not only to the typical style of the genres drawn upon, but to other tracks on the album. Overall, this is an interesting album, but there is too much filler for it to truly stand out.