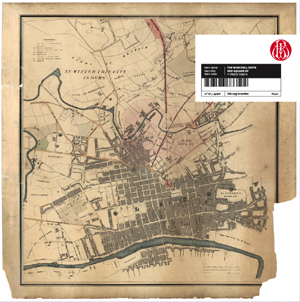 Red Square is the new EP from indie newcomers The Winchell Riots. Defining them as ‘indie’ may be a bit too vague though – in the opening track Love, The Great Olympic Sport it seems the band have more in common with emo pop bands like Halifax than Tokyo Police Club. This lies not so much in the vocals, which actually seem rather out of place on the track, but with the catchy guitar hooks that pervade it. That being said though, in My Young Arms the band seem to actively decide to change their sound quite a bit, opting to emulate the emotional, drawn out sound of sure fire indie bands like Editors. This sound seems to be the one the group settles on for the rest of the EP, and in truth, the remaining tracks are better for it. Vocalist Phil McMinn seems far more at home from this point on, particularly among the ambient synths and slow melancholy riffs of Glasgow Spacefight. The lyrics may not be amazing, but McMinn genuinely is a joy to listen to, while the tracks themselves never become repetitious; the sound alone creates a real sense of atmosphere that’s strangely lacking in indie bands of late. As for genre – it’s hard to define, but that’s no bad thing. An interesting debut, and a successful one at that, particularly after the initial issues of mismatched vocals and sound in the opening track are straightened out.

Bombay Bicycle Club – Rinse Me Down