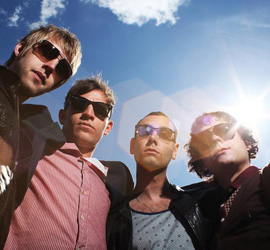 What is immediately apparent about ‘Hazy Days’ is that it sounds relatively raw; this automatically grabs the attention as too often artists feel the need to release tracks that have had the life “cooked” out of them! In this way, Pint Shot Riot certainly seem reminiscent of the Jam with their definite allusions to 60s beat music and the mod revival seeming to be the base for their stylistic touches. However, they also incorporate elements of pop along with punk which makes Pint Shot Riot a band that it is certainly difficult to pigeon hole.

Rocket (lead vocals) sings in a way where his accent is laid bare to such an extent that it adds a sincere touch to a track which at times seems somewhat throwaway. The riff that acts as the integral force at the centre of this track is a powerhouse that will make feet tap wherever the band decides to go. The harmonies during the chorus are nothing short of gorgeous and the entire song has a catchy element which gives it an appeal to both children and adults alike. There is nothing particularly original here but what ‘Hazy Days’ lacks in freshness it more than makes up for in the sheer addictiveness of its central hook which stays in the mind long after it leaves your speakers. Pint Shot Riot have all the tools here to become a commercial success but one can only hope that this does not come at the expense of what makes them so great to start with.

Loadstar – Link To The Past