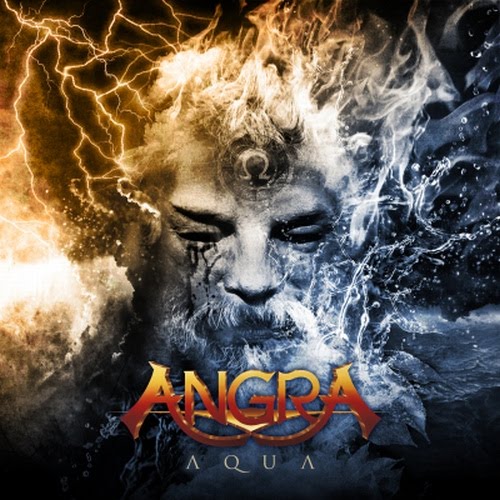 It has to be said, when Brazil is mentioned, one doesn’t immediately make an association with power metal. However, Angra are here to try to change that with their cascading guitars and suitably melodramatic songs. Combining the manic obsession with speed that bands such as Pantera have made into an art form and the sense of grandeur that Iron Maiden bought to the scene, and enough prog and folk (of the non-twee-indie-folk variety) to guarantee a little more variation than constant chord gallops for an hour, ‘Aqua’ is the latest power metal epic unleashed upon the world.

We start things off with the atmospherics of ‘Viderunt Te Aquare’, with a choral chant, storm effects, the grim knell of gothic fame, and all the sombre trappings you could hope for. This somehow fluidly leads to the manic speed riffs of ‘Arising Thunder’, with harmonised guitars playing cascades of scales over breakneck drumming. In verses, this is switched out for chord stabs to emphasise the vocal rhythms and nuances, building to a soaring chorus. The vocals themselves are more human than much of your niche-market heavy metal, yet just as operatic and dramatic. The guitar solos are ludicrously rapidfire scale runs duelling against one another before the bridge comes in with galloping chords and symphonic strings.

‘Awake From Darkness’ is a much heavier and somewhat darker affair, channelling Pantera in the savage groove that the bass digs itself into, however it also boasts ornate moments in the torrential drumming and switching of moods in the twin guitar attack from keeping up with the kickdrum to “epic” chords ringing out over the rugged sonic landscape. The chugging instrumental really brings the track to a climax, but then the piano and strings break occurs. To be frank, the band barely pulls it off, but they are able to pick up their flow quickly enough.

Then, the band switch to a much, much more subdued mood for ‘Lease Of Life’, a tender, introspective moment that slows the drums to a humanly recognisable pace, and heavily features a blissfully melodic piano, as Falaschi uses the softer side of his singing ability. There are sections, particularly where the guitars enter, that border on ballad territory, although the band are able to show admirable restraint in keeping the song slow and quiet despite the obvious temptation to explode into more of what was heard earlier. This restraint trails onwards in the palm-muted chug of ‘The Rage Of The Waters’, as the drumming resumes its bombardment of noise and the overall feel returns to grandiose but the keyboards are still audible and the guitars hurtle rather than wail. Even the instrumental sections are satisfyingly taut rather than sprawling as they leap over scale patterns and experiment in texture, giving the agile bassline a chance to breathe and showcasing both guitarists’ skill.

Angra proceed to experiment further in ‘Spirit Of The Air’, with a sparkling intro that incorporates fluttering strings and flamenco guitars before they once again tread the realm of metal, albeit in prog ballad form, with Falaschi once again exercising his ability to not sound comically stilted when it comes to expression outside the realms of channelling the great spirits of metal. The operatic section in the middle feels a bit superfluous and jars when juxtaposed with the very metal guitar solo. ‘Hollow’ initially promises a break from any further musical pretensions as it leaps wholeheartedly into the tumultuous storm of metal guitars with gleeful abandon. The string section sounds are still present, although they are used to prop up the immense guitar sound more than anything else. However, the folk sections return later on in the track. There are moments where flamenco and power metal are able to coexist, but whenever the styles distinguish themselves too strongly, the track begins to feel awkward, like two jigsaw puzzles that someone is trying to combine into one. Ditto with ‘A Monster In Her Eyes’, another ballad that does occasionally reconcile the two aspects of the band’s music more successfully than its predecessors but cannot quite escape a slight awkwardness in the process. ‘Weakness Of A Man’ improves on the formula, ditching the syrup to deliver a more metallic version of sentiment, and by this point Angra seem much more adept at switching styles and blurring between them.

Finally, ‘Ashes’ closes with sombre piano and strings under mournful and brittle vocals. Classical piano bleeds into rock riffs as the track builds to one last power metal hurrah, the cymbals crashing and guitars wailing out.

I suppose that an album isn’t always the sum of its parts, especially when the parts feel so incompatible. As ’Aqua’ moves along, the two aspects of the band’s sound seem increasingly coherent, but the result still throws the listener and it means that the whole thing feels fragmented not only as an album but between two-minute sections of five or six minute tracks, and the exhilaration of the first few tracks gives way to bemusement and slight tedium over time.

Subtlety is rarely metal’s forte, and Angra are very much a take-it-or-leave-it band, providing some fearsome solos and epic grandeur alongside their sensitive moments, and they do not make concessions towards casual listening. If you are up for some bombastic fantasy escapism, ‘Aqua’ has it in spades, but don’t expect anything more or less.