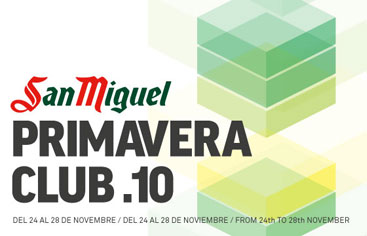 Barcelona, 23rd September 2010.– San Miguel Primavera Club reveals the names of all the artists who will perform at the fifth edition of the San Miguel Primavera Club, which will take place simultaneously in Barcelona and Madrid between the 24th and the 28th November. Headlining is a pop legend, Edwyn Collins presenting his comeback record after a serious illness and he will share the headline with another Scottish band, the veterans Teenage Fan Club and their precious guitar pop. The frontman of Sebadoh and member of Dinosaur Jr. Lou Barlow and the organic electronic music of the Canadians Holy Fuck.

The presence of The Jim Jones Revue and their hyper rock’n’roll should also be highlighted, Sophie’s acoustic sets, the presentation of the Wavves new record, the debut, in our country, of John Grant with his record “Queen Of Denmark”, the brilliant indie rock of The Rural Alberta Advantage and the stage comeback of the pioneers of melodic hard core Cornflakes.

The festival will also have space for a bunch of yet to be discovered bands, both national and international. Such as the dark British band S.C.U.M, influenced by Throbbing Gristtle and The Birthday Party, the pop revelation Yuck from The United States, British folk from Smoke Fairies, the exuberant arrangements of the band from Finland Rubik, the noise of Der Ventilator from Barcelona, the country sounds of the Madrid band Sacramento and the spirit of K Records with Senderos.

The most electronic part of the line up has two particularly attractive bands: Mount Kimbie with their post-dubstep and Dam-Funk & Master Blazter with their refreshing electronic funk. The Hundred In The Hands, from Warp and the crazy disco edits of the duo Los Massieras will accompany these bands.

San Miguel Primavera Club will also include several more relaxed proposals, like the homage to Lorca by Josephine Foster & The Victor Herrera Band, the New York band Callers, Seward from Barcelona and the extraordinary voice of Zola Jesus and of course it will be full of bands who have managed to make a name for themselves during the year both here and abroad. From the kraut rock of Lüger to the delicate pop of Wild Nothing, going through the garage pop of Jaill, the primitive blues by Guadalupe Plata, the Catalan folk of El Petit e Cal Eril, the lo-fi of Ganglians, the punk by the London band Male Bonding, the Captured Tracks sound of Beach Fossils, the classical pop of Fred I Son and the post punk sounds of Thee Brandy Hips. And it doesn’t end here; the noise by Homentages, Fasenuova and M Ax Noi Mach, the experimentation of Narwhal, the rock by The Situations, Screaming Females and Tweak Bird, pop from different viewpoints by Agent Ribbons, Niño Y Pistola, Tamaryn, Frankie Rose And The Outs and Twin Sister and more guitarry sounds from Caballo Trípode and Eat Skull.

THE LINE UP OF SAN MIGUEL PRIMAVERA CLUB 2010

The full festival ticket for the San Miguel Primavera Club Barcelona or Madrid gives access to all the venues of the festival, subject to the capacity of the different venues. Some of the bands will perform more than once in the same city.

The minimum age to get into the festival is 18 years old. There are no age restrictions for the San Miguel Primavera Sound festival (apart from for some of the pre-festival concerts)