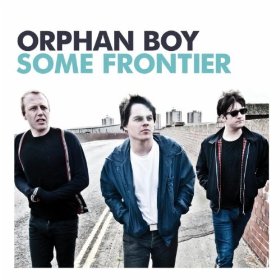 Hailing from Manchester, Orphan Boy are closer in style to the NME described “resurgence of Manchester Guitar Music”. This basically means that they don’t sound like Oasis and the like. And this is true, they don’t, it does rattle along on a Joy Division-esque bassline but that’s where the tried and tested Manchester band touchstones end and Orphan Boys own sound begins to shine through. Unfortunately, this is kind of a bad move.

Orphan Boy try to be quietly anthemic and achieve this to a degree; however they miss out on any sense of urgency or dynamism. It slouches along on one, maybe two chords tops and while singer Rob Cross sings with everything he’s got, the music itself never has the release it’s building to. This is definitely a brave choice for a single; no doubt that it gets under ones skin, a slow burner, and it shows that Orphan Boy as a whole must be confident in the extreme but if you’re trying to get noticed then some tribal drums and some ringing guitar lines doth not an attention grabbing single make.