Following a string of successful album releases in their native Belgium and Europe, Absynthe Minded are set to break out and take on the UK with their single ‘Envoi’ taken from their fourth LP entitled ‘Absynthe Minded’ released in 2009.

Having stormed the Belgian Music Industry Awards in 2009 – winning four awards including Best Album and Best Band – Absynthe Minded are sure to become their country’s finest musical exports. ‘Envoi’ maintains the band’s lasting affinity with jazz & blues, but channels these influences into an accessible pop formula that has already seen the single sell over 20,000 copies via downloads.

Based on a poem by writer Hugo Claus, the song has become the number 1 single in Belgium and is currently featured in the French charts. The band have recently confirmed an appearance on Taratata, the equivalent of Jools Holland in the UK. Having now signed to French major, AZ, Absynthe Minded are bound to spread the net much wider come this autumn, and with France and Belgium already under their charms, the UK is the next stop for the band in 2010.

Absynthe Minded are coming to London on 16th November to play The Garage. 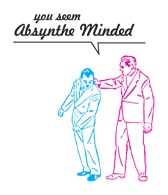