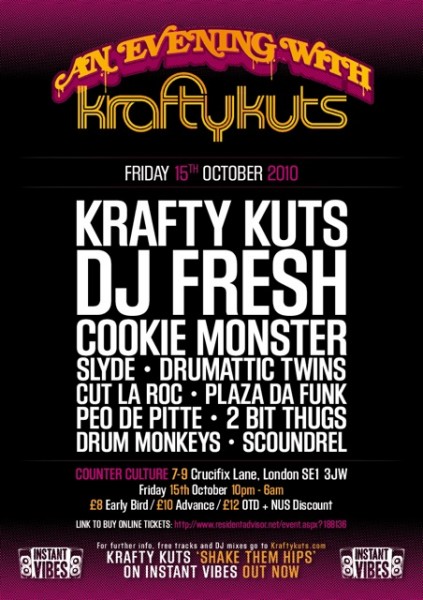 After touring the world all year, Krafty Kuts is taking it back to the old school by hosting his own warehouse party at the most talked about venue London has seen open in the past 10 years. Counter Culture is opening the doors to where Acid House originally took the UK by storm to host 99 days of music, arts and theatre and the curators have cherry picked the UK’s best DJ’s and promoters to get involved with the celebrations. The venue is located in the hustle and bustle of London Bridge; set deep with in the arches to create the most fantastic clubbing experience you will have this year…

Heading up this show-stopping line up, one of busiest, if not THE busiest DJ’s on the dance music circuit today, it’s none other then the multi award winning Krafty Kuts. Krafty has been headlining club nights and festivals for the past 10 years showcasing his ‘Monster’ re-edits, mixes and deck wizardry to clubbers around the world. Along with his mantelpiece full of awards, Krafty Kuts was the very first ‘breakbeat’ Dj to be listed in the DJ Mag Top 100 DJs. No longer pigeon-holed in the breakbeat scene, Krafty takes the crowd through a journey of musical treats spanning funk, hip-hop, breaks, dubstep, drum & bass and many more.

Next on the bill is DJ Fresh. Timeout magazine call him ‘Uberproducer‘, Knowledge voted him best producer in the world two years running and refer to him as ‘a legend‘ and DJ Magazine have said his label Breakbeat Kaos is a ‘sonic juggernaut‘. It is with great honor to have one of the pioneering Drum & Bass artists co-headlining a soon to be sell out show!

An artist who is on the tip of everyone’s tongue at the moment, new Dubstep winder-kid, Cookie Monsta will be heading down to London Bridge to text the Funktion One Sound System. Cookie Monsta has been making huge waves in the Dubstep scene in 2010 and has gained thousands of fans amongst clubbers, producers and DJs a like. Every working DJ worth their salt has a Cookie Monsta record in their bag at the moment.

This monster night comes with award winning, world renown, floor-slamming, speaker shaking DJs who are ALL making waves with festival appearances, chart topping records and sell out shows around the globe and back again.Slybeats head honcho’s Slyde will be doing their thing in the main room(?), the Dex n FX duo DrumAttic Twins will be showcasing some new material, the hottest producer right now Peo de Pitte will be unleashing his late night sound to the masses,  2 Bit Thugs will be bringing their bass-heavy 4 deck show up from Brighton, Plaza de Funk will be celebrating his birthday in true style with a spectacular birthday set, Drum Monkeys are making a special guest appearance and last, but no means least, Scoundrel.