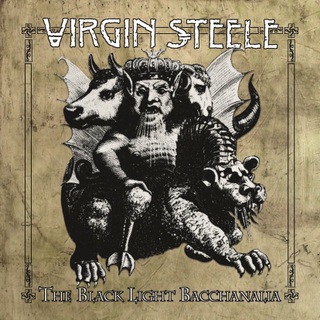 Virgin Steele are, well, an odd band to consider. Mixing the bombastic elements of metal with a grandiose yet understated element of classical (thus having dynamic variation in their music) they have been kicking about the baroque world of metal for nearly thirty years, and have just released their latest album, ‘The Black Light Bacchanalia’.

Album opener ‘By The Hammer Of Zeus’ is surprisingly understated. Despite opening with no fussy intro, merely a growling yelp and some granite-hard guitar chords and thundering bass, what follows feels like HIM covering power metal. Full of impossibly fast bass drums throughout and considerably metal distortion on the guitars, everything is incredibly melodic and even melancholic, especially the innocuously tuneful and tender vocals. The instrumental is suitably grand, featuring choral backing and note-bending galore, all over a crunching chord descent. The follower ‘Pagan Heart’ incorporates a primal hop-skip and chord progression, draping it with the trappings of heavy metal in brutal chord abuse and clanging cymbals, making it a heavier track in general, although it still keeps within the realms of unexpectedly restrained, the buzzing guitar wails and tense bassline refusing to explode until a good two minutes. That said, once Virgin Steele do finally go into the territory of a rock-out, it is a rewarding experience that bleeds together classical piano/bass interplay and seething 80s metal into some fun riffs and melodies.

‘The Bread Of Wickedness’ is comparatively a blood-and-thunder metal track, being a short three and a half minutes and angry as Virgin Steele get. Although this is a band that could never be abrasive, this track is in possession of much more focused energy to the stomping drums and gritty vocals. To add to this underlying sense of a monster waiting to be unleashed, ‘The Orpheus Taboo’ is a dark stormcloud of riffs and energetic drum-smashing with killer instrumental moments wrapped up in a chugging verse and angelic chorus. Too orchestral to be truly heavy, this track instead settles upon bombastic and gets all the running it can out of it, which admittedly is quite a lot. Switching around tempo, dynamic, harmony, mood and melody makes this an enjoyable slab of metallic symphony to sit back to and possibly unfurl the horns to in a suitably ceremonial manner.

This said, Virgin Steele label themselves as “barbaric-romantic”, and ‘In A Dream Of Fire’ belongs to the latter camp, as the symphonic climax that opens the track leads into a piano-driven ballad. Despite the ever-present lead-heavy guitar chords, keyboard melody and a sentimental overtone are the order of the next few minutes as the band offer up some snarling beauty in distorted yet distinct melodies. However the vocals are still a little on the weak side, and given their forward placement, they feel oddly stifled. ‘Nepenthe’ is a direct follow-on far as atmosphere goes, stripping back the guitar to allow the piano to build atmosphere, and a slowly tapped cymbal to build tension as the vocals kick it up a notch to the land of the living. Halfway through, the metal guitar and bass jump back into the fray, slowly growling through the chords and light riffs as we settle into 4/4 ballad territory, complete with the heartfelt slow guitar solo that creeps pleasingly to find a balance between the earlier atmosphere and later rock elements before eventually combining into a last soaring chorus.

The crowning glory of the symphonic aspirations is the eleven-minute behemoth that is ‘To Crown Them With Halos Parts 1+2’, a slow and determined intro underpinned by rumbling bass and overlaid with searing guitar chords unfolding to reveal a verse of vocals and piano, before the rest of the band gallop back for an epic and grand chorus with all the fantasy comradeship and fires and skies you could ever want. The slightly lopsided cymbal stomp of the rhythm provides an added boost to the track, and the fragile tunefulness of the vocals is aided by the lilting piano and offset by snarling guitar. A midpoint solo features some real metal guitar work with scale runs and harmonised noodlings, joined by a string section for emphasis, which eventually gets its own brief opportunity to stab and swirl of its own accord. The second half adds a sinister edge as the lyrics add in a battle of the gods, and everything ramps up, losing the earlier widdliness to become a more sinewy creature, even in the quieter moments. And this leads to, of all things, a true metallic riff-fest in ‘The Black Light Bacchanalia’ that drags the barbaric element of Virgin Steele to the fore to finally present itself. Tempered by their lighter side, the riffs and noise on offer is an exhilarating boost to the album as a whole. Similarly, ‘Necropolis’ sprinkles in some mindblowing speed metal guitar and drums to add real kick.

We creep away with some real classical moments in the gentle intro and outro of ‘Eternal Regret’, once again using the romantic side of the band to create a sombre exit fitting the title. However, this track feels considerably more powerful in its balladry than earlier songs, even if the falsetto does get a bit grating at times, as does the cliché metal ballad structure.

I would say that this is very much a Marmite album. Parts of it are great bordering on inspired, but as a whole ‘The Black Light Bacchanalia’ feels like a record that never quite reaches the giddy heights of what it could be. The band are clearly talented and know their stuff, but the music never really punches or bites, nor does it mesmerise and flow, instead settling awkwardly between the two aspects of the band, unaided by a clinical mixing job. There are flashes of inspired work, and some moments of brilliance in both parts of the band’s sound, but in the end it is a little too long and a little too tame.

Bad Religion – The Dissent Of Man