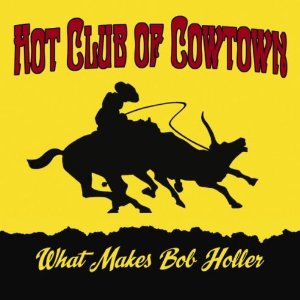 Well, it has to be said: country in its many forms is often maligned by the music press as an embarrassing cliché, the Wild West being a fable long since passed on and the American farmhand tradition now replaced by McDonalds factory processing things. But can’t this equally be said about all genres? And one music form given a fresh ear can prove just as valid and enjoyable as another. Given that, diving into the country swing of The Hot Club Of Cowtown is a refreshing break from the world of rock n roll.

Their oddly-titled LP ‘What Makes Bob Holler’ opens with the charming and laid-back ‘A Maiden’s Prayer’, a lovely instrumental with a lead violin part that is so expressive it is almost a song in itself with double-stopped notes that are in perfect harmony with one another, and the sun-soaked guitar and bass create a wonderfully evocative atmosphere, dreamlike and smooth, by using trembling guitar chords and simple rhythmic basslines. All the instruments are perfectly captured as well, their acoustic tones warm and inviting on the ear. Following up is the laconic swing of ‘Along The Navajo Trail’, with a toe-tapping rhythm and smeary jazz slides on the violin, all used to back the warm and good-natured vocals. The violin solo is in possession of sparkling energy as in playfully interacts with the solid rhythm guitar and trills in answer to the singing. ‘Oklahoma Hills’ is another thick country song that borders on knowing cliché, albeit one with distinct musical talent in vocal harmonies, contrasting lyrical stereotype with a fresh and enthusiastic approach to western swing.

‘Big Balls In Cowtown’ is an energetic, cheeky little piece of jazzy music, the twangy American accent of the singer only used to add an extra level of humour into the track. The guitar solo is simple yet fits with the mood perfectly, and the rhythm is tight, keeping the music in check, never letting it get too self-indulgent. The overall feel is that of a country-toned Hot Club Du France, with the jazz violin/rhythm guitar interplay. This once again occurs in the swing styles of ‘It’s All Your Fault’, where the harmony-drenched guitar melodies back up the purring female vocals in a cooing tease of a song. There is arguably little in the way of lyrical content, but the push-shove dual instrumental moments and the way the guitar almost attempts to outdo the vocals create more attitude than words could.

This is contrasted with the tender, wry instrumental ‘Faded Love’, where the guitar and violin duet with one another beautifully, each allowing the other its moment to shine. Shades of blues melodies creep in, but never dip the track into sadness, instead allowing for greater musical expression while keeping the overall style bright yet evocative. Similarly the cool longing tones of ‘Keeper Of My Heart’ show that The Hot Club Of Cowtown, while enjoyable and fun are by no means a one-song band, using melancholy and mischief with equal aplomb.

‘Osage Stomp’ and ‘Smith’s Reel’ are breathless dances, both with a rapid walking bassline that borders on a solo at times, fighting for room against a bustling violin melody that hops and skips and tremolos with fantastic intensity. Similarly, the guitar solos in both are blistering affairs with a fluttering salvo of notes to shower upon the listener.

Penultimate track ‘Time Changes Everything’ once again offers up a sense of wry humour, a tale of heartbreak that leads to turning over a new leaf. In closing is ‘What’s The Matter With Mill’, a playful blues swing song to wind things down with. Cooing vocals contrast with the smooth tumbling violin and bustling guitar hooks.

Although The Hot Club Of Cowtown are far from a one-song band, there’s hints of them pigeonholing themselves a little, which is always a risk when in possession of such a distinct sound. However, that said, ‘What Makes Bob Holler’ is an esoteric and enjoyable record, blending bright humour with genuine musical talent and a passion for their chosen style. Anyone with an open mind would do well to check out this band, you may be pleasantly surprised.

Les Shelleys to co-headline with Gregory & The Hawk 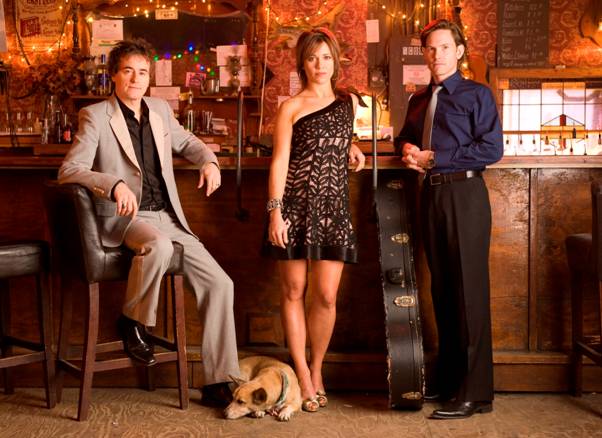