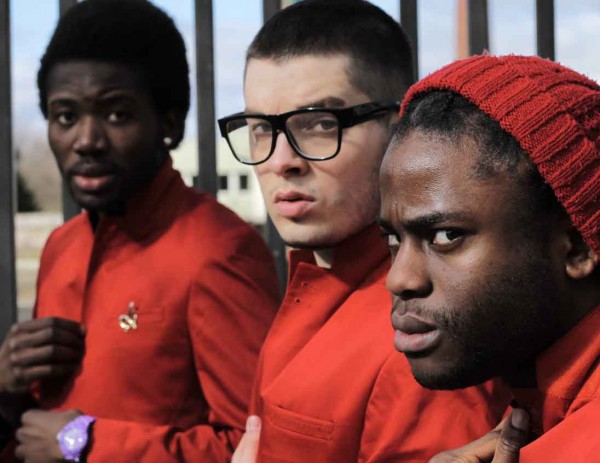 Young Fathers, the Edinburgh based trio, with a sound reminiscent of early Outkast, De La Soul and Spank Rock return with a brand new single. Coming quick of the back of ‘Automatic’ – released this summer on This Is Music (Little Boots, SMD) –  Young Fathers will release ‘Fevers Worse’ digitally through Black Sugar on December 6th.

Deviating slightly from their usual upbeat party tunes, ‘Fevers Worse’ introduces a darker and more intense side to their repertoire, with its rapidly pulsing, intoxicating electronic beat and looping vocals.

1066, the supreme producer behind Young Fathers’ remixes of Phoenix, Golden Silvers, Shoes vs Primary 1, Dan Black and Esser – G from the band – has this time turned his hand to their own music. Adding dubby beats and glitching samples to highlight their razor-sharp lyrics, 1066 brings ‘Fevers Worse’ straight onto the dance floor.

The Blessings – founding members of Lucky Me (the art collective set up in Scotland with Hudson Mohawke amongst others) – also add their 90’s reworking of ‘Fevers Worse’ to the mix. An up and coming talent on the dance scene, they chop up the track with remarkable results – twinkling percussion interspersed with a thumping drum machine.

Having shared the stage with Dizzee Rascal, Professor Green, Grandmaster Flash, La Roux and The Noisettes in the past; Young Fathers have also co-written tracks with Simian Mobile Disco and break-beat duo Stanton Warriors.

Constantly on the road, refining and developing their critically acclaimed and brilliantly choreographed live show, this year saw Young Fathers headline the BBC Introducing Stage at T In The Park, play Creamfields, Sonar and Glastonbury (with Stanton Warriors).

Their eagerly awaited debut album will be out Spring 2011.