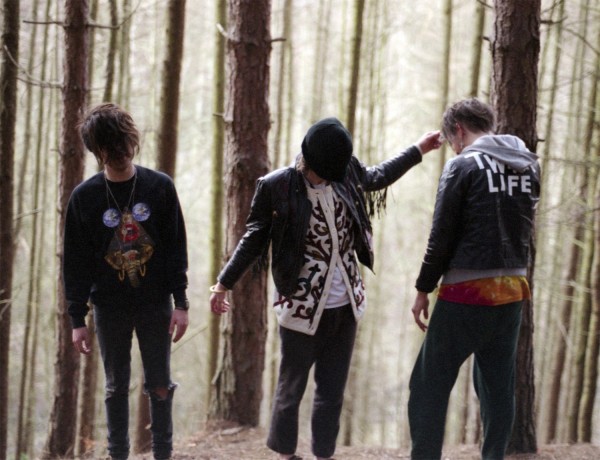 AAAMusic: For our readers who don’t know anything about you, can you give us a little info on the story so far for Is Tropical?

Is Tropical: We started writing songs in the spring of 2009 inbetween daydreams in order to forget about being hungry and having no money. We’ve released a single a while ago on Hit Club who are our mates from Manchester, and the next single ‘South Pacific/TAN MAN’ is coming out in November on our label Kitsune..

AAAMusic: What made you decide that you wanted to write and perform songs?

Is Tropical: In the best possible way it was just an air of escapism.. We would regularly wake up hungover in random places and ended up spending alot of time together… so inbetween meetings with the Jobcentre we had a go at playing some songs in the basement of a massive house in Elephant and Castle which has now been knocked down…

AAAMusic: Are there any other groups that have had an influence on you?

Is Tropical: A lot of the people we kick around with make music, and so bands like Age of Consent and Mystery Jets already felt like part of our musical ‘family’, since then we’ve toured with some bands who have become all good friends, like TEETH!!!, Good Shoes, The Big Pink… Our outside influences are all really different, but the important thing for us was the spirit of healthy competition and encouragement in writing pop music.

AAAMusic: What can we expect from your highly anticipated debut album next year?

Is Tropical: When we were deciding on the tracks to go on the album we realised that there aren’t really any we aren’t quite happy with, so we’ve been free to sequence the album more like a story with its own twists and turns… There wasn’t any element of filling in the gaps with material we though was less strong. Still it’s got our style so it has a pretty broad sound, no two songs sound the same… It’s like when you wake up and you have little bits of all different dreams floating about together in your head.

AAAMusic: How did the tour with Mystery Jets come about and are you looking forward to it!?

Is Tropical: Like we said we’re good mates with the boys anyway and we’ve been pestering them to go on tour together for a while, it feels like we’re going on a big holiday rather than 19 days of work. We’ve both been working on covers for each other and there’s a Mystery Jets t-shirt that we collaborated to make together..  Serious bromance…

AAAMusic: Do you think touring loses its fun when your schedule becomes as full as yours has over the last year?

Is Tropical: It becomes more fun to tour when you’re really busy because a tour is a genuine escape from things like sorting stuff out at home, you all just bundle in the van and it feels like a massive road trip. It differs totally from when you’re working in the studio or writing at home, everyone is in a different mindset.. and yeah you’re aware that you’re working to play your music to more new people but for us its a total escape and an opportunity to see different places and get really good at playing live.

AAAMusic: As a newly formed group, what do you think makes you stand out from other artists?

Is Tropical: When we started the band people told us we had a really different sound, and all the songs we made differed from each other so much it was hard to see what kind of crowds we’d fit with, what kind of people would like our music. And also from day one, we’ve divided opinion, some people like our really heavy dance side and some people prefer the more pop.. and that’s been one of the most fun parts of IS TROPICAL for us… that people have found it hard to pigeon-hole us, and we’ve been able to be billed in a versatile way, from headlining spanish festivals at 3am to releasing singles like South Pacific to playing warehouse parties with friends like Crystal Fighters.

AAAMusic: Are there any bands out there at the minute who you really admire? And any genres that you particularly dislike?

Is Tropical: There’s good parts of any genre, I dont think its possible to really hate a whole genre of music unless you haven’t explored it alot. A couple bands that make really great music and deserve some recognition are Women who are a band from America and Gold Panda who makes amazing electronic music here in the UK.

AAAMusic: What is the future for Is Tropical?

Is Tropical: We recently found out a show we were going to play in Japan was cancelled so we’re looking forward to going back there again. There’s rumours of a European tour coming up but we can’t say anything more about that. Also its a dream to go out and play SXSW sometime soon…