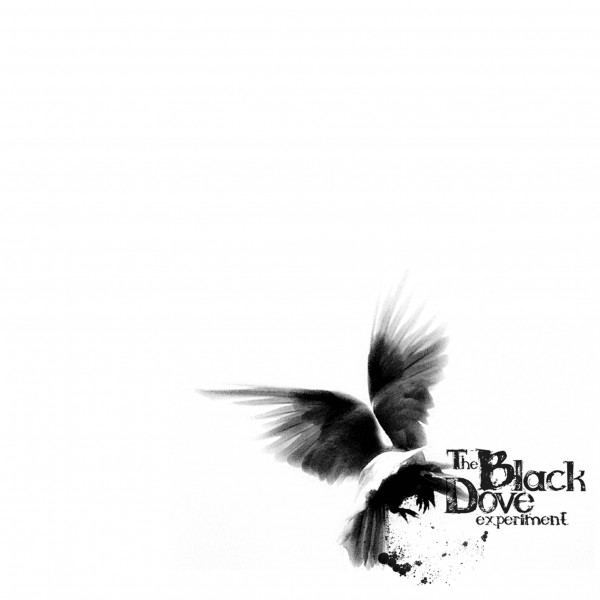 Anyone who knows me could vouch for my growing cynicism and tiredness surrounding all this acoustic folk-pop style indie. Anyway, sometimes I will complacently open up a CD thinking it will be more of the same, and promptly have my mind blown by the contents. Case in point, The Black Dove Experiment’s self-titled EP. Expecting something unplugged and twee, instead I got the unholy and oh-so-delicious spawn of grunge, shoegaze and electronica to clear the cobwebs from my ears with.

The opener ‘This Town’s A Battleground’ kicks off with trancelike, glacial synths pushing forwards a dance-rock beat and a squalling, dark guitar, and then on top of that, hoarse, clear vocals. The result is something bleak yet exciting, a cinematic cross between grunge back when it was actually exciting rather than apathetic, and the more cerebral recesses of electro. ‘Clear All Exits’ builds shimmering atmosphere in the intro, starting with a shimmering, reverb-drenched riff, and building upon it with heavy echoing bass and sparkling synth, before the adrenalin-fuelled drum beat ushers in the rock without sacrificing the feeling. The verses are dreamy, the pre-chorus builds, and the chorus stomps and soars without any hint of contrivance. The whole tracks flows without effort, carried by the woven reverb and solid throbbing bass riff.

Midpoint ‘We Are Not Your Soldiers’ is an immediate contrast, led in by a sparse and bass riff-heavy hollow kickdrum march played over a desolate synth landscape, bleeding in the pale grey shades of ‘Seventeen Seconds’ Cure into the mixture of things. The verses keep this skeletal approach, all behind vocals which are unapologetically raw yet undeniably compelling. The lyricism here is worth noting too, being neither pretentious nor basic, reaching straight for the heart. Once the band decide to get their teeth into some noise, there’s a fantastic cymbal-shattering cascade of riffs and rolling beats.

Starting with a lurching yet tight to the point of shrinkwrapped snare drum/hi-hat attack, ‘Such Cruel Intentions’ is muted yet rabid, a pulsating chunk of fuzz steeped in bitterness, the skittering dance rhythms and cinematically-inclined atmospherics building a song so strong it is nearly a physical presence. The refrain “You wanna kill somebody, don’t you boy?” and similar chorus is crooned with subtle menace and fear, and when heard over such claustrophobic and seething music, by the time the song reaches its climax, it has created a mesmeric and queasily fascinating intensity that leaves my mind blown and the hairs on the back of my neck standing on end as the last “You wanna kill somebody, well I’m right here.” fades from my hi-fi with a chilling accompanying cutoff.

We are closed with the dark synths of ‘Burn Out’, where the electronics really get a chance to shine, layering themselves expertly and with jetblack intensity. Everything builds to a spinetingling instrumental finish where the band throw every last ounce of what they have at the listener and the result is truly astonishing.

The Black Dove Experiment have, with this stellar EP, shown a searing yet subtle passion I only wish more bands possess. This is only their first release, yet the control and power on offer is truly astounding. Chiaroscuro shoegaze shading between pitchblack mood and blinding white energy result in a collection of tracks that send shivers down the spine and the sense I may have just witnessed the start of something phenomenal.