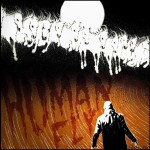 Looking for some chilling atmospheric gloom for the upcoming November evenings? I believe Humanfly’s latest release, ‘Darker Later’ will be the fix you’re looking for, injecting pitchblack grunge into even darker metal with a ferocity that is admirable and yet equally compelling. Not that the opening title track would have you suspecting the weight of later tracks, as it is a mesmeric acoustic guitar song, featuring a jangling finger-picked riff seeped in ominous mood alongside barely audible yet raw vocals whispering malevolently in a plaintive pseudo-monotone. The whole affair has a sound quality that feels like the song is being filtered through a layer of thick smog or sand, which only adds to the buildup of a sinister, toxic mood.

And then with a rush of feedback and sampled riot noise, the real meat of the release is thrown in the listener’s face with the sludge metal tumult of ‘English And Proud And Stupid And Racist’, where seething addictive guitar riffs adorn crashing cymbals and driving bass in a pounding track that slides between tempos and textures with an unsettling and perhaps rather drawn-out mix of ponderousness and grace, one second providing a seismic metal assault and the next a naked muted guitar chug or a brief bass/drums rumble, before it descends into a musical riot for the outro. Blending nearly seamlessly from this comes the seventeen-minute doom-mongering of ‘Heavy Black Snow’, which features an eerie spoken-word narrative courtesy of Rose Kemp accompanied by a lilting, barbed-wire minimal riff that builds power and distorted volume as the track continues. The instrumental sections are somewhat comparable to putting your head into a particularly gothic (yet by no means goth) cement mixer, and the vocal aspects are by turns a compellingly listenable story and trance-inducing chants, and the last few minutes descend into a cacophony of metal that feels like the apocalypse of the world that the track has been created, with tumbling drums and crushing chords.

‘Stew For The Murder Minded’ is a very different kettle of fish, ditching the atmospherics for a fast-paced thrashing beast of a track, featuring some rabid yet surreally muted screaming beneath a track that is somewhere between the oppressive sludge metal of earlier and recent hardcore punk, both nimble and bone-crunchingly heavy. The marriage is not an easy one, with vocals rendered nigh-on incomprehensible behind the barrage of metal noise and the carefully-constructed world of the previous tracks obliterated by this slab of exhilarating destruction, but as a track this is by no means bad and the musicianship is fascinating in its taut exploration of chaos. In contrast, ‘The Enemy Of My Enemy Is Me’ is controlled and slow-building, dragged in literally screaming by means of anguished vocals and a pulsating, gritty synth note, before diving into more metal savagery. The vocals here descend into a deathgrowl of suitably inhuman proportions as the instrumentation flirts with death metal style before leaping into dizzy syncopated pounding and some terrifying percussive acrobatics, before the abrupt halt.

Closer ‘This Is Where Your Parents Fucked’ begins hushed before launching into a slow, sickened riff-stomp that is ideal for headbanging with horns thrown. The swirling bleakness off the main riff is offset by wailing metal vocals and breaks of cleaner, unsettling melody amongst the grit.

There is something tantalising about what Humanfly have offered here – ‘Heavy Black Snow’ is a curiosity that I could learn to love, and the more conventional sludge/doom tracks display flashes of brilliance in their own malevolent way, but as a collection ‘Darker Later’ feels unbalanced and awkward. However, if you like your guitars growling and percussion rabid and your sonics as black as your heart, then this could easily win you over with its skilled musicianship and brave, if not 100% successful, experimentations.