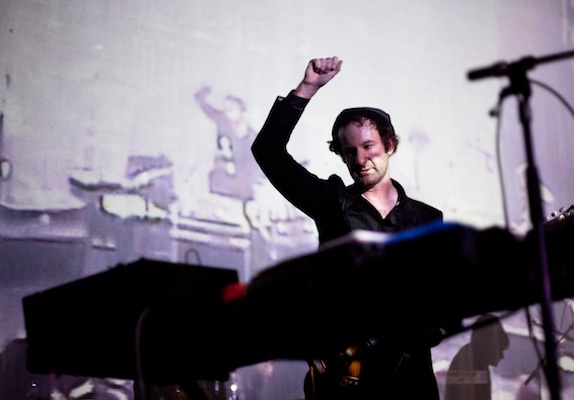 After a barnstorming performance in front of a packed Club NME at London’s Koko last Friday, Napoleon IIIrd has released a live session of Rough Music from his new album Christiania. The video, which is alive with flickering digital textures and looped projections, was filmed live at Temple Works in Leeds last month by Broken Pixel, and is first of the three to be released.

Christiania is proving to be his breakthrough album, hailed as an “embarrassment of musical riches” in the NME, as well as positive reviews from Word (“thrilling”), Artrocker (“infectiously entertaining”), Stool Pigeon, Loud & Quiet, Drowned In Sound (“stunning”) and The Line Of Best Fit (“faultless”). More information on the album, and a free Napoleon IIIrd DJ mix, can be found athttp://www.brainloverecords.com/christiania.

With a series of shows in the coming weeks in Nottingham, Norwich and Leeds, Napoleon IIIrd will return to London on December 9th to play Hoxton Hall. Tickets are available at http://www.wegottickets.com/event/98725.

Finally, the album’s epic closing track, MTFU, has been released as a free download, and is available for blog use here:http://soundcloud.com/brainlove/mtfu.

Christiania is out now on CD & digital formats.

The Cordelier Club give away free mp3