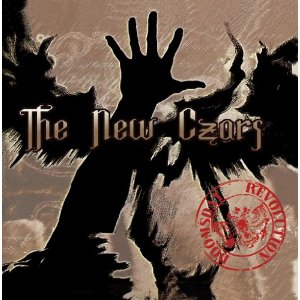 I’ll have to start off by saying that with the inevitable Nine Inch Nails comparisons surrounding them, The New Czars have been on my radar for a little while. But can their debut album ‘Doomsday Revolution’ live up to this lofty namedrop? Weighing in at 16 tracks and over an hour’s play with a mix of good solid rock songs and esoteric instrumental diversions, this could prove to be interesting.

Phenomenal opener ‘Abstract Prague’ blasts straight to business with a barrage of heavy guitarwork and cymbal crashes, interspersed with eerie phlanged guitars descending augmented intervals and feral march-stomps on double bass drumkits, and a tumult of bass and manic note torrents. The whole thing is a chaotic explosion in a heavy metal factory: hot and heavy to the extreme, and yet executed with almost surgical precision, pulling in prog influences effortlessly and creating a blinding opening track that is equal parts Mars Volta and Iron Maiden. This sense of neo-prog metal innovation runs at a constant surface sheen throughout, adding a whole other dimension to the proceedings.

The main meat of the album is, well, most definitely meaty, with every sound thickly textured and red-blooded. The instrumental approach of the tracks follow the promise of the opener, a bizarre hybrid of prog and old-school 80s heavy metal, with ominous synths dragged in from Trent Reznor’s hellish basement. The vocals are a fantastic grunge-hoarse heavy metal snarling drawl, dripping attitude and emphatic passion with raw intensity. ‘Don’t Watch Me’ is especially NIN in its shrieking overdriven electronics and pummelling, tightly arrhythmic rock foundations. ‘Brush With The Devil’ and the title track ‘Doomsday Revolution’ are sinister, stomping, sneering drawls with sleazy undertones, whereas ‘Confessions’ is a maelstrom of intense riffs and solos wrapped around dynamic percussion and a passion that does indeed push the limits of all bandmembers involved.

There are definitely NIN-isms in the overall tone: the sludgy churn of the music with emphasis on thick, growling distortion is very reminiscent of both ‘Broken’ and ‘The Slip’, however there’s a massive classic rock influence too, with a down-and-dirty attitude throughout that brings to mind Guns N Roses at their most powerful, mixed with the dark atmosphere of Iron Maiden and the rough bassy distortion of Soundgarden and Alice In Chains.

The bizarrely named instrumental ‘Crotch Critters’ drags in funky rhythmic edges and manic noodling alongside more exotic melodic influences for a stoner/prog rock-out, the psychedelic, effects-bending solos carried on a solid raft of riffery and rhythm, and these elements of swaggering finesse carry on into the seething phaser grind of ‘Desperate’ with its impassioned, stomping outbursts mixed with tender gravelly croons.

The New Czars are a band I can’t quite put my finger on. Dark and seductive; smartly artful yet down-to-earth, and with a sound to shift tectonic plates. Too rock to be metal and too metal to be rock, with a large debt to the 90s in sound and style, they are a band entirely constructed from almost-but-nots. What can be said is that they are almost guaranteed to be huge in a very short while, with inevitable and well-deserved high billing at Sonisphere clear in my crystal ball. My only gripes might be some comparatively middle-of-the-road lyricism, but when they bring the sweaty unapologetic rock this well, I’m not too fussed. That, and the length can test the patience of listeners. However, overall I’ll say this: I’m not sure what The New Czars are, but I’m confident that they’ll be the new favourite band of many a hard rocker looking for something a little outside the box. And as for those still in mourning for the mighty NIN being placed on the back burner, The New Czars may be just what you need.

To Bury A Ghost – The Hurt Kingdom