Celebrating their 30th year together, New Model Army decided to have a two-date residency at the HMV Forum in Kentish Town, playing different sets each night and filming the shows for posterity. Despite their lumping in with the “goth” scene, I would always place them on the protest-punk end of things, with intelligent yet sensitive and incredibly human messages to each song, each delivered with warm heart, punk bile and some real, full-blood folk, not merely rock with an acoustic guitar but tracks you could feasibly jig to.

Coming in from the cold rather late, going to the front was still fairly simple given the laid-back atmosphere bought on by the free-flow format of the gig and the fact that New Model Army are very much a cult band with a close-knit yet easygoing following. In a move of either bravery or lunacy, New Model Army had decided not to have a support band, instead playing a 40-minute support slot, an interval, and then their headline slot. Starting out with just the frontman on stage with his trusty acoustic guitar, the band trickled on stage one by one during the 40-minute warmup, playing a diverse range of songs across their career, before coming back after an interval to do their full headline slot into the night.
It would be easy for a band playing anniversary shows to revel self-indulgently in their own success, but New Model Army simply refused to rest on their laurels. The only concession to the milestone was the camera crew, but otherwise it was simply the band on stage, playing the shows with as much heart and heat as you would ever wish for. No string sections, no light shows, nothing but phenomenally and indeed preternaturally good music. They gave their whole career an overview, from fresh new tracks to old favourites and first songs. Not simply a best-of and far from a blasé play-through of tracks, both sets were beautiful, passionate triumphs of a band who have plugged away at what they do for three decades and have had none of their fire extinguished. Acoustic guitar driven protest-punk blended with fully electrified rockers and sobre introspection for a show that wasn’t so much a gig as an emotional journey.
Songs like ‘Higher Wall’, ‘Drag It Down’ and ‘White Coats’ provoked the crowd into furious action, opener ‘Better Than Them’ was a powerful singalong, and ‘Mambo Queen Of The Sandstone City’ exploded into a joyous atmosphere. Of course, you can’t have light without shade and the bleakly windswept and heartbreaking ‘Green And Grey’, and the atmospheric ‘These Words’ (complete with the venue’s lights being turned down) provided some truly emotional anchorpoints in the evening. The band paced their setlist wonderfully, and all the material was played with a cathartic power that simply cannot be expressed in words.

The shirts at the merch stand read: “New Model Army, bringing fury and redemption since 1980.” That night, we experienced fury, we experienced redemption, and much more besides in quite simply a glorious evening supplied by a band who are one of the most underappreciated gems of the UK music scene. Long may they continue to infuriate, redeem, and inspire.

Glock to release single Cool In The 60s on December 13th 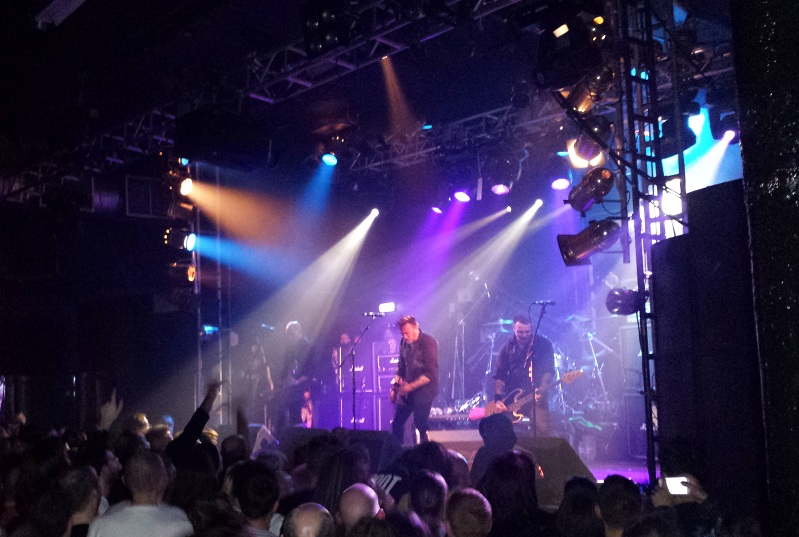