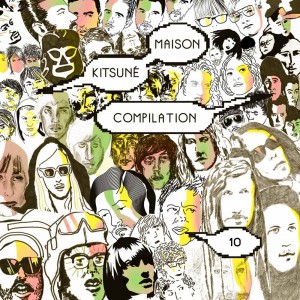 If you are anything like me then you will have tried really hard to hate Kitsuné; their hit rate for new artists is ridiculous and at times it is easy to feel that the market is saturated by their produce. However, the quality of their artists is incredible and there is no better showcase than a compilation album as good as this.

Their latest effort is a glide through indie dancefloors that has the ability to make you jiggle in your seat as well as the tracks that make you sit back and just listen. This 25 track extravaganza is a mixed bag at times and attempting a track by track rundown would seem a somewhat futile exercise. Furthermore, what is so special about the ‘Maison’ series of compilations is the way in which you can find a new gem even though it might be surrounded by rubble.

The album starts with one of the stand out tracks, the sublime ‘Walker’ by Cascadeur which sparkles in spite of its fragility. In reality, this is not a track which is particularly representative of the album as a whole in that it is a rather sombre number, however, if you want an example of the sort of magic Kitsuné are capable of then this is a great start. If you want a taste of the album then go for ‘South Pacific’ by Is Tropical, an insatiable melody driven track that is as catchy as it is cutting edge or ‘See Spaces’ by the wonderful Teeth who are bound to be huge soon enough. For those who prefer what they know, there is a great track by Digitalism as well as a fantastic remix of ‘What You Know’ by Two Door Cinema Club. If you prefer the less avant garde then go for ‘Liar, My Dear’ by The Heartbreaks, a great track that is sure to be picked up by Radio 1 in the near future or perhaps ‘Crave You’ by Flight Facilities which manages to be painfully cool at the same time as sounding hugely familiar.

There are far too many good tracks to mention them all here but those already discussed are a great starting point for those yet to discover the Kitsuné way. The joy of a compilation is listening to it in its entirety and picking out the gems for yourself and this is a pretty easy task in ‘The Fireworks Issue’. Rather than the usual label releases, this album allows all genres and artists new and (relatively) old to sit together so this really is a showcase rather than a middle of the road collection. You might not like everything that Kitsuné has to offer but I defy you to not find at least one track that stands out, and for that reason this is a valuable collection. Highly recommended.