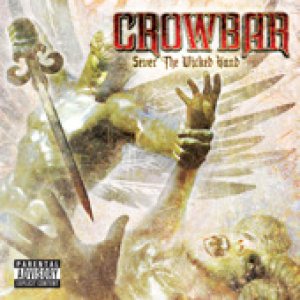 As with many things in life, heavy metal is at times an unnecessarily complex beast. And so this tradition continues with ‘Sever The Wicked Hand’, Crowbar’s offering to the sacrificial altar of general release. Is it sludge? Is it thrash? Is it hardcore round the edges with a doomy caramel centre? Well, there’s only one way to find out…

The downtuned tumult of the band’s assault tactics leave little debate as to their sludge metal origins. Tracks such as ‘Liquid Sky And Cold Black Earth’ are stellar examples of the genre. Starting with glacial feedback and bowel-loosening downtuned bass rumble, all held in restraint by trudging cymbal and snare percussion, this is a chilling, brooding piece of work that prowls into the listener’s ears slowly yet never once faltering. Bleak lyrics are snarled out, and harmonised guitar chords offset the lurching strangeness fantastically. As for the evocative keyboards of ‘A Farewell To Misery’, it displays the finery of Doom atmospherics. There is a mystic wonder in its multi-instrumental melody and brooding choral approach that manages to evade cliché to create a dark and multi-faceted piece of music. However, elsewhere there are pseudo-Melvins moments in the mad thrash riffery and hardcore drum blasts of tracks like ‘Cleanse Me, Heal Me’ and ‘Sever The Wicked Hand’, with its relentless drive and menacing yet lightspeed sonic attack. Bass drum blastbeats and chugging metal bass/guitar teamwork make for a hybrid that could in actual fact appeal to both metal and punk camps. Similarly, ‘The Cemetary Angels’ is a real bludgeoner of a track, unleashing a powerful attack upon the listener from every possible angle. Guitars churning, drums pounding, bass rumbling from hell, vocals layered from multiple positions, and all of it balanced like a satanic sword of power. The trudging downtuned-to-impossible-degrees breakdown and outro is also a welcome change from the stereotype of wanky solos and fast breaks.

There are also hints of old-school Black Sabbath influences here. The slow burn intro of ‘Let Me Mourn’, with its cavernously layered, almost symphonic guitar sound crawls over viciously restrained metal drumming, which later begins to do some fantastic loping tom/bass rolls beneath the caustic sonics. The harmonised vocals bring to mind a more satanic, choral Alice In Chains, yet the main vocals are wholly the child of evil doom metal in their raw, brutal power.

Another real standout would have to be the incredible ‘As I Become One’. Blending simplistically devastating savagery with some incredible musicianship and almost flawless production, this is hybrid metal at its finest. The guitars chug behind distortion of an epic scale, the bass is barely on the human spectrum and is felt rather than heard, and the entire track is so tight, so well-crafted, and so passionately played that one can’t help but feel they’ve hit heavy metal Valhalla, especially as the chilling instrumental hits, evocative and breathtaking in its mounting scales, melodic overtones and tidelike cymbals. The spiritual twin to this is the grandiose but never bombastic ‘Echo An Eternity’, with its climactic intro and real sense of the cinematic tempered by Crowbar’s workmanlike ethic of refusing to go over the top. As a result, the track unfolds to grand proportions yet remains within the filthy menace of human intensity and layers of grinding sludge rock rather than mechanical metal soloing, the doom metal adding fantasy-tinged emotion to the growling vocals.

The Dungeons & Dragons of heavy metal does rise on ‘Protectors Of The Shrine’, but it is saved from nerdy tedium by a thrash-indebted approach that is not merely technically gifted but impassioned and alive as it flutters and stomps in equal measures with a searing attitude that puts aside any potential geek suggestions for some great rocking out. We bid farewell with a king amongst sludge in ‘Symbiosis’, the chords at once monstrous yet melodic, and the rasped vocals in possession of a chillingly compelling humanity as the album reaches its lyrical peak.

It has to be said, the lyrics rarely stray beyond the doom metal territory of the unremittingly bleak and evil, except to flirt with hardcore angsty musings and so lyrically, this may be lacking. Opener ‘Isolation’ suffers most from this, decidedly lacking in any non-sonic weight, and ‘I Only Deal In Truth’ feels slightly lacking in verbal variety. However, this is a small gripe of mine. In the face of such a fine specimen of heavy metal, I feel that the brains of the outfit is in the music. Each song not only leaps from the speakers, but has a real sense of vitality, a hard feat in the world of oft-too-soporific doom and sludge. The tracks are paced between the brutal and the beautiful, and in both cases mixed to a near-godly balance of instruments, with each skilled bandmember given equal chance to shine. This is a legendary gem of an album made by talented craftsmen. Find it, turn up the hi-fi (don’t forget the bass end!) and rock out until the ancient gods come down, and then proceed to rock out even harder.

Gay For Johnny Depp – What Doesn’t Kill You, Eventually Kills You