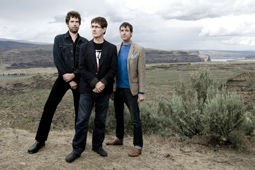 The Mountain Goats have announced the dates for their UK tour:

New album, All Eternals Deck will be released on the 4th April on Tomlab in the UK.

Speaking about the record, singer/songwriter, John Darnielle explains, “The songs cluster around themes of hidden things and the dread that hidden things inspire, but also the excitement, the attraction, the magnetic draw that scary unknown hidden things exert.”  The title refers to an apocryphal tarot deck, though Darnielle explains that the album’s fascination with the occult originates in having run across the word “occult” in a textbook in his nursing-student days. “’Occult’ just means ‘hidden’ or ‘not immediately obvious’ in medical terminology.  There was a nursing directive to be aware of ‘occult blood.’ I thought it was the greatest thing I’d ever heard,” he says.

“We wanted to see how disparate seasons and moods and locations and producers would play out in the songs,” explains Darnielle. The result? “If you’ve ever watched, say, a 70s occult-scare movie where one of the scenes involves a few people visiting a store front fortune teller, getting their cards read, and then they’re trying to feel super-hopeful about their predicted outcome when what they’re visibly actually feeling is dread, then you have a pretty decent idea of what this album is all about.”

Check out the opening track,  Damn These Vampires from the album.