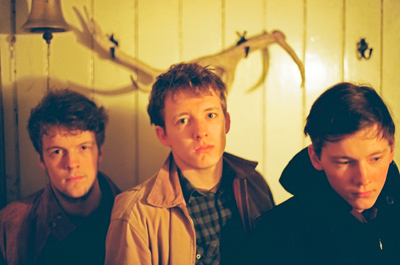 Flashguns release their new single ‘Passions Of A Different Kind’ on the 28th March, through Friends Vs Records. It is taken from their eagerly debut album, due for release in the Summer of 2011.

‘Passions Of A Different Kind’ follows quickly on from the hefty rotation by Radio 1’s Zane Lowe and the widespread blogger hype garnered for last December’s thumping, ‘Come And See The Lights’ single.

Following a support tour with Mona and their own extensive string of headline dates, Flashguns spit out another soaring taster to their debut album of the same title.

Recorded in a dilapidated barn in the bleak winter of rural Somerset, ‘Passions of a Different Kind’ contrasts that starkness with a huge guitar-driven punch. Produced by Luke Smith (Foals) and Barney Barnicott (Arctic Monkeys, Temper Trap), it’s a moody, euphoric sound, guided by the vocals of Sam Felix Johnston.

Having spent the best part of 2010 holed up in their remote studio, Flashguns are keen to spend 2011 out on the road, showcasing the songs they have pored over and shedding the shackles of those close confines. These songs were made with more than Flashguns’ own company in mind, and this second step in their introduction is a telling indication of just how vast a space it could fill.

18th March – Inside Out, Darlington