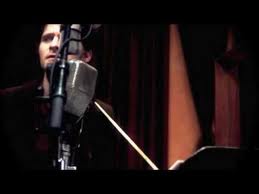 US troubadour James Apollo arrived on UK shores late last week for a nine date UK tour in the run up to the release of his new album ‘Born Lucky’ on 11th April 2011 through Marterry Music. He plays London’s Bull & Gate tomorrow night.

To mark these tour dates James has made a free download of album track ‘The Violens’:

James Apollo – The Violins by Stayloose

In the summer of 2010, James Apollo released his British debut ‘Til Your Feet Bleed’ and he now follows that with ‘Born Lucky’, a career-spanning compilation that ducks and weaves through his extensive back catalogue, stretching back over six prolific years. ‘Born Lucky’ is a record that sweeps through the emotions, both fleeting and fundamental, that document the bittersweet, cinematic legacy of both Apollo’s past, and his ongoing journey  – Americana at its most romantically sunset-strewn and desolate.