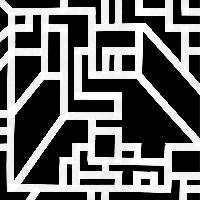 Zomes is the name of solo music by Asa Osborne, guitarist of the legendary Baltimore band Lungfish.

Guided by the visionary guitar work of Osborne, Lungfish carved out a singular sound. Predating the drone wave by almost a decade, the band explored modal repetition and cyclical variation. Lungfish, while not currently active, remains a highly influential band, their cult status growing to legend. A clear example of the growth of their influence is the fact that their catalogue sells several times as many records now as it did when the band was active.

Zomes distills this energy and these towering cyclical melodies to their essence. Distorted keyboard melodies tumble one over the other held together by simple tape-looped drum beats. Earth Grid, Zomes’ second solo album, is the culmination of Osborne’s years of exploring meditative modal models. Written, played, and recorded entirely at home on cassette tape, Earth Grid, is an intimate and intentionally primitive recording. The album was mastered by Bob Weston.

The cover art was created by Osborne, whose reputation as a visual artist is growing after several group and solo shows – including one at New York’s Mountain Fold Gallery with Lungfish singer and friend, Daniel Higgs. A fan of primitive or outsider art, Osborne’s work uses common objects to reach transformative ends. The grid on the cover is created with common medical tape. A visual reflection of the music, the cover takes simple elements (white medical tape on black paper) and via careful placement and repetition of patterns with subtle variations creates a beautiful space transforming the simple to the infinite.

Zomes will be touring in Europe with Kogumaza in May. A record of live improvisations and a new studio album are forthcoming.