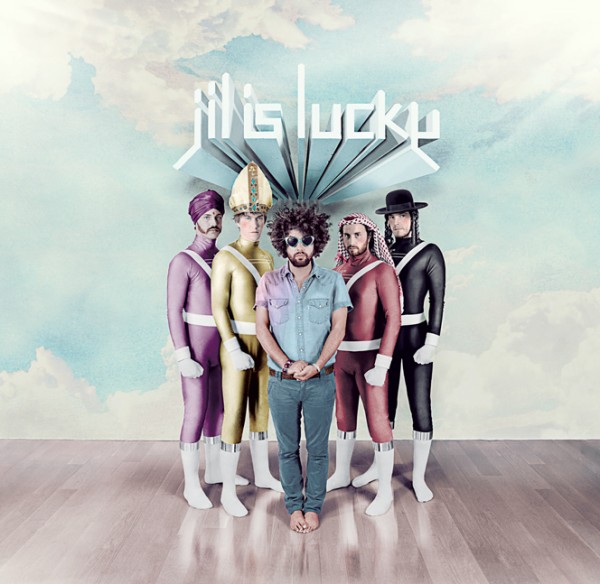 Seasoned traveller and musician Jil Bensenior is the frontman for the five piece French band Jil Is Lucky.  Having taken up the guitar at 7 he started playing in smoke filled French bars with his brothers’ band at age 12.

Jil’s legacy, and the thematic backbone to this self-titled album, is that he has travelled the world with his experiences imbuing the tracks therein with a sense of autobiography.  Jil has taken this album quite seriously by creating layer upon layer of mystical sound bites, gypsy folk (as in ‘Judah leow’s mistake’), and Eastern European and Arabic melodies.

This LP is a follow-up to the groups’ critically acclaimed 2008 EP, with the lead single ‘The Wanderer’ being by far the most commercial (and autobiographical) and sure to grace an advert near you in the near future.  All in all Jil is Lucky’s debut album is a lively, humorous, very charming and likeable album and throughout its twelve tracks it covers a multitude of musical genre, as mentioned before.

‘Winter Is Over’ starts off the album slowly but spontaneously bursts into life with a rousing horn section that leads nicely into ‘J.E.S.U.S Said’ with its Cure like opening that introduces the ‘Love Your Neighbour’ themed jollity.

The second half of the album starts with ‘I May be Late’, a stirring 70’s infused sing-a-long, in which Jil states that his “heart is a trashcan and my head is a washing machine”.  The next track ‘The Wanderer’, with its’ violin intro, peaceful gospel-esque handclapping rhythmic nature sets the stage for the final five tracks wherein the listener is treated to a five track phase that contains his more sombre and reflective songs.

From ‘Without You’, where he sings that “my bed is already empty and my eyes are on fire.  My black beard is crawling up to my crazy hair-do, maybe I should write Folk songs without you”, through to the epic ‘Hovering Machine’ Jil is Lucky display more depth, expression and variation than would have been expected from what on paper appears no more than a gapyear kid extolling the virtues of the musical lands that he has had the privilege to visit.

At times Jil’s voice, though unique does become a mix of Nick Drake’s upper-class English introversion and the cracking, on the verge of tears vocals of a ‘Letting off the Happiness’-era Conor Oberst.  This is no better displayed than on tracks such as the hurting romanticism of ‘Without you’.

Many of Jil is Luckys’ statements hint that during the course of the recording he is in a way attempting to discover himself and find a meaning from all that he has experienced throughout his travels by putting them down on paper so to speak.  If one listens to the album from this perspective, one is able to see a reflection of one’s own inner search, or journey if you will.  With this in mind the dozen tracks that show no apparent cohesion become more sensible.

The last track, ‘Hovering Machine’, is a perfect end to the album with its glimmers of instruments and maniacal truths that intertwine beginning humbly with a Clapton-esque ditty that over the course of nay on eleven minutes builds to a frightening crescendo.

This ending befits an album that has no specific genre-defining sound, nor message to convey.  It is a searching opus written with great intelligence that seeks not the approval of its audience and in so doing becomes, at times, spell-bindingly beautiful and heart-breakingly romantic.  Add to these idioms bouts of European folk and gypsy-tainted odysseys and you have something truly special.

‘Jil  is Lucky’ is a great journey of an album, much like the past realities of the protagonist.

A wonderful piece of work by an artist that will have critics intrigued for a long time to come.

Hermanos Inglesos – Take Me Out