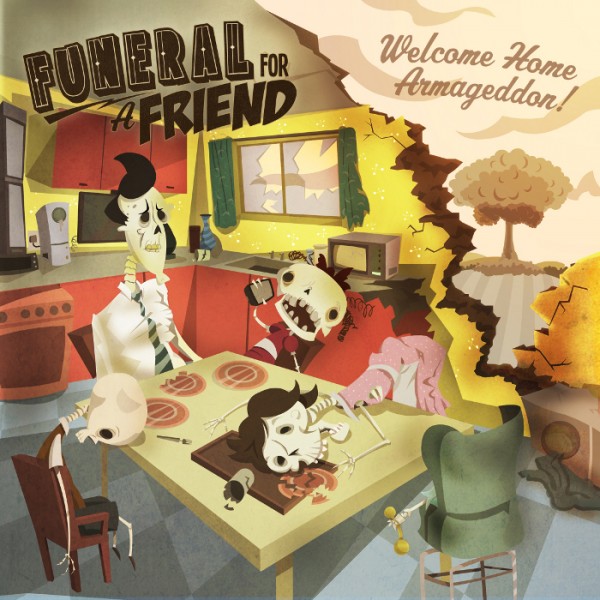 Funeral For A Friend – Behind The Scenes of ‘Sixteen’
http://www.youtube.com/watch?v=f-2tQSfErH0

Welsh rock legends FUNERAL FOR A FRIEND are set to release new single ‘Sixteen’ on 28th March. This will follow the release of the band’s fifth studio album ‘Welcome Home Armageddon’ which is out on 14th March. Produced by previous collaborator Romesh Dodangoda, the band homed in on the essence of their new material in a way which would present the new tracks as being as true to their live show as possible. The result of this approach will no doubt send shivers down the spine of many a FFAF fan.

Drummer / vocalist Ryan Richards explains the genesis of new single ‘Sixteen’ – “Matt originally came up with an acoustic skeleton of the song and we all loved it, but in the form it was in at actually sounded more like a Secret Show (Matt’s country side project) song. The melody and the lyrics were so good that we had to find a way to make it work. It was definitely a lot of fun having the band interpret the parts in our own individual ways and turning it into a Funeral for a Friend song.”

Funeral For A Friend recently released a track from the forthcoming album as a free download to get fans excited about the record’s release. The excitement soon filtered through to radio and TV who picked up on ‘Front Row Seats to The End of The World’, with multiple plays coming from Zane Lowe and Dan Carter on Radio 1 and the video for the track rocketing to Number 1 on Scuzz’s chart as well as getting main playlisted at Kerrang! TV.

Embracing the heady mix of raw heaviness and pure melody which helped establish the band’s name when they were starting out, vocalist Matt Davies-Kreye describes the album as “a fist in the face followed by a kiss on the cheek”. The heavier vocals take an integral role on several of the tracks. From the fast, punky feeling of ‘Old Hymns’, through the seven-string guitar led riff spectacular ‘Aftertaste’ and the even more riff-heavy ‘Spinning Over The Island’, FFAF have crafted an album of potential classics with each track as exciting and unpredictable as the one before it. Anthemic songs with killer melodies such as ‘Sixteen’ and album closer ‘Welcome Home Armageddon’ are further demonstrations of the band’s songwriting prowess and their ability to incorporate a multitude of different musical elements.

The band will also hit the road in March / April next year with a string of dates at intimate venues, some of which are in towns they’ve never actually played before. The extensive run of dates has been purposefully plotted to traverse through those venues which both longtime fans and those who have discovered FFAF in recent years will appreciate for their up-close-and-personal feel. Support on these dates will come from fast rising British band Rise To Remain.